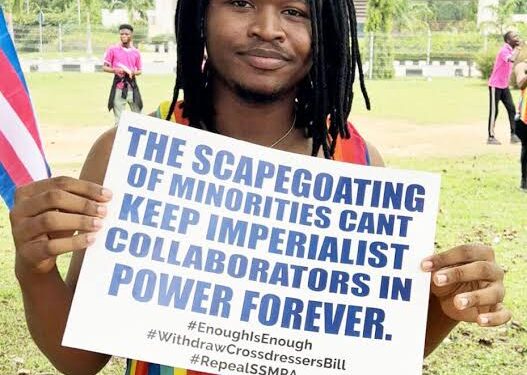 Members of the LGBTQ community dressed in rainbow colored vests marched in a risky protest in Abuja, demonstrating against a bill introduced by lawmakers in Nigeria’s lower house of parliament last month seeking to ban cross-dressing.

According to the bill, cross-dressers will be fined about $1,200 or punished for a period of six months in jail.

Also, weeks after the bill was passed, a transgender woman was beaten and stripped in Lagos.

Such tormenting incidents is what LGBTQ activists say they feared and their main reason for fighting back. Kayode Ani is a chair at the Queer Union for Economic and Social Transformation, or QUEST9ja.

They said that such laws put against queer people only encourage people to take violence into their own hands, just as they had after the SSMPA was passed — individuals forming vigilantes and going into people’s homes because they suspect that they’re queer, beat them, and murder them.

The cross-dressing bill is an expansion of Nigeria’s 2013 Same Sex Marriage Prohibition Act that punishes gay sex with up to 14 years in prison.

The bill allows comedians to cross-dress for entertainment purposes. However, activists say it will only worsen the already existing violence against nonbinary or transgender people.

In addition, Nigerian transgender woman, Empress Cookie says she haa been the victim of many horrible incidents. She recalls one experience with a mob in Abuja two years ago saying.

“They started stripping me naked, and they were, like, ‘See you’re even wearing a female’s pants.’ I was emotionally traumatized. I was drained. At a point, I was like, lifeless.”

Furthermore, public displays of attention like holding hands by sexual minority groups are outlawed in many African countries where onlookers often cite religious and moral reasons.

The Nigerian religious groups that support the same-sex marriage ban are also in support of the bill restricting cross-dressing.

Nonetheless, the cross-dressing bill is yet to undergo several readings in parliament and be debated upon before it is passed and forwarded to President Muhammadu Buhari for approval.