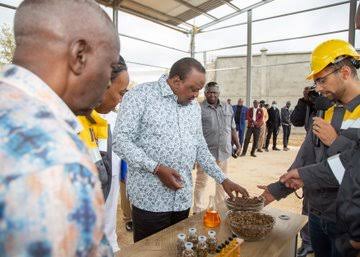 Moreover, it started production last month and has already employed close to 200 workers, a majority of which are young people from Kenya.

In addition, the agri-hub was established following a meeting held in Nairobi between President Kenyatta and Mr. Claudio Descalzi, the CEO of Eni SPA.

Eni SPA is an Italian multinational energy company with its headquarters in Rome.

Furthermore, Eni Kenya, which is a subsidiary of the Italian multinational company, signed an agreement with the Government of Kenya in July last year to promote the circular economy by setting up 20 agri-hubs for production of bio-fuels and related bio-products.

Makueni agri-hub is the first one in Kenya.

While speaking to the workers during the inspection visit, the head of state encouraged them to work hard so that the factory can expand rapidly and create more jobs, earn farmers’ income and help to reduce the cost of fuel.

Mr. Tavolini further reported that the factory has already provided market access to over 25,000 farmers.

He added that the agri-hub in Makueni would also operate as a training and technical support hub for the farmers.