You Will Not Intimidate Me, Ruto Fires Back at Raila 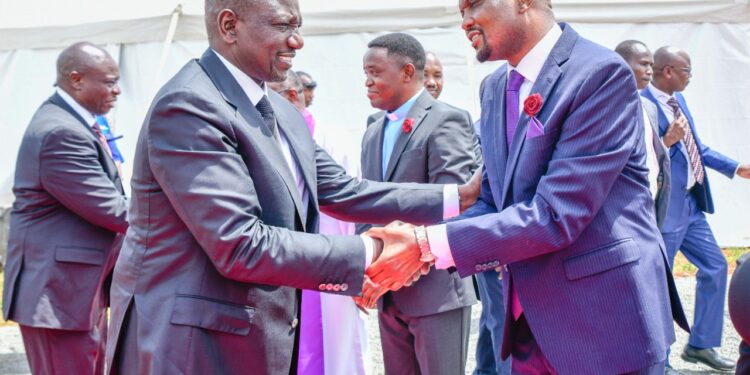 President William Ruto and Trade CS Moses Kuria.Ruto says he will not be intimidated by the opposition.Photo/PCS

President William Ruto has said he will not be intimidated by opposition leader Raila Odinga.

Ruto says he is used to Odinga’s gimmicks and will not be intimidated into sharing power with him.

While dismissing planned demonstrations by Raila Odinga as a futile, Ruto claimed that the rallies and protests were an  attempt meant to intimidate him.

“Please, this tactic will not work on me, I urge you to forget about it,” he said.

Speaking during the funeral of Trade CS Moses Kuria’s sister, Pauline Kuria, Ruto said his government will not be blackmailed into serving the interests of a few people

“We are going to serve the people of Kenya, we will not allow a few people holding demonstrations to derail us, that will not happen,” said Ruto.

Instead, Ruto wants Odinga to focus on his role as an opposition leader and work to keep the government in check.

He accused the opposition of using demonstrations as a diversionary tactic to disrupt government attention on pressing national matters.

President Ruto warned that  he would not allow the demonstrations to destroy businesses and the economy.

At the same time, Ruto dismissed the call of an audit of the presidential election as a circus.

“Those people are in the darkness yet we are now in the light. I want to ask you please change the tactic from the previous one. During Moi’s time you said he didn’t win, he was sworn in; then during Kibaki’s time the same and he gave you nusu mkate (half government). Uhuru’s time came and you got the handshake,” Ruto said

“They are not doing these demonstrations for the benefit of Kenyans, but for their own benefit, their families and their businesses. We will not take that road again,” said Ruto.

Witnesses In Didmus Barasa Murder Case In Fear Of Testifying