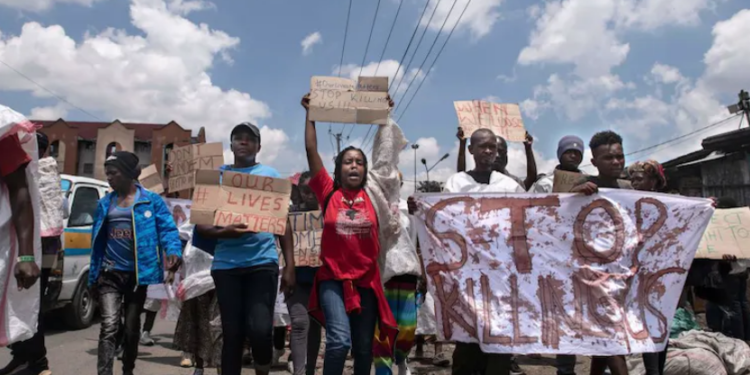 Barely a month into office, President William Ruto of Kenya ordered the disbandment of a special police unit placed at the centre of a widening investigation into a wave of extrajudicial killings and enforced disappearances. At least nine officers of the Special Service Unit face charges relating to the disappearance in July 2022 of two Indians and their Kenyan driver. The Indians were in Kenya at the invitation of Ruto’s presidential digital campaign outfit.

Police killings of citizens are shockingly commonplace in Kenya. Those who bear the brunt are mostly poor, young and male suspects of crime or terrorism.

Since 2017, 1,264 cases of executions and 237 enforced disappearances have been documented by the Police Reform Working Group in Kenya, a civil justice advocacy group. Another player in the social justice movement is the Mathare Social Justice Centre, which has been documenting these state-sanctioned murders in Mathare, a low-income area of northern Nairobi, since 2014.

Other centers followed suit in other neighborhoods in Nairobi where unlawful police killings occur regularly.

Yet these and other records are incomplete for a number of reasons. First, they tend to focus on a specific locality. Second, they only include cases that multiple sources show to be police related. “Police related” means, for example, that the victim was last seen with police officers. In most cases, such victims were later found in the morgue or never again.

The special police unit is not the only culprit. It is the third special squad under the Directorate of Criminal Investigations to be disbanded under a cloud in the last 13 years.

Other security and policing agencies implicated in extrajudicial killings and enforced disappearances include the armed forest and game park ranger units, the Kenya Defence Forces and the Anti-Terrorism Police Unit.

Since 2005, I have researched police violence and extrajudicial killings in Kenya, especially in Nairobi, Mombasa and Kwale. I work closely with grassroots organizations.

Considering the evidence of police killings of citizens over decades, some social justice activists I have spoken to recently are asking “why now?”.

Police killings are systemic in Kenya and have been since the late 1990s. So the disbandment does not seem to be prompted by a quest for justice. Instead, it seems more likely spurred by a wish to replace influential officers from the previous regime with new and trusted ones. This is a tactic Kenya has seen before.

Investigations are rare unless there is overwhelming public outrage stoked by the media, or the victim is well-known or well-connected.

That might explain why justice was won for lawyer Willie Kimani, his client and their driver following their abduction and execution by police in 2016, while thousands of other complaints are unattended.

It might also explain why the disappearance of Ruto’s campaign staff is being pursued with vigor – involving more than 100 police officers at one point.

Over in Nairobi’s poor neighborhoods, it’s business as usual. Social justice activists document a rising number of cases of dead bodies with clear signs of torture.

There are no direct witness accounts to verify police involvement in each case but there is reasonable suspicion. This suspicion is derived in part from the fact that several of the deceased were on police “death lists”.

Death lists, according to social justice activists, are names and pictures circulated by police and their paid informers. These lists of crime suspects are mostly circulated in WhatsApp groups and sometimes even on Facebook. Many are killed after ending up on these lists.

Even in cases where there is ample evidence, “killer cops” are rarely prosecuted.

Criminal violence by police also takes place in other cities, at the coast and in remote rural areas in Kenya.

This points to a structural rot within the police service, of which the Special Service Unit is a symptom rather than a rogue element.

Extrajudicial killings by police rarely attract wide public outcry outside the urban settlements and poor rural areas where they mostly occur. They have been normalized in public discourse.

Despite mounting evidence, only a small fraction of the documented cases reaches the courts. With such a low success rate, activists find it more and more difficult to persuade witnesses to come forward.

This explains the high levels of cynicism about potential police reforms among the social justice activists I have spoken to recently.

There is not much to read about the replacement of one director of the Directorate of Criminal Investigations with another. As noted, it is not uncommon for a new president to replace top officers within police cadres. What’s more, the replaced director was no friend (12:55) of the new president.

A genuine move towards justice and peace could start with disbanding all police units implicated in violence over the years. The entire service could be overhauled.

Second, all perpetrators should be brought to justice instead of being redeployed.

Finally, a reformed police service should be completely transparent and held accountable by the communities it serves. Only then will police work with local communities on safety issues instead of doing the bidding of political and business elites.

Naomi van Stapele is a professor in 'Inclusive Education' at the Centre of Expertise Global and Inclusive Learning at THUAS, The Netherlands. Her long-term collaborative research with gangs and social justice activists in East-Africa and Europe focuses on gangs, masculinities, lived experiences of police violence, inclusive education, community organizing and transforming authority. Naomi has published peer-reviewed research articles in: AFRICA, Journal of Eastern African Studies, The European Journal of Development Research, Policing, Environment and Planning D. Society and Space, Conflict, Security and Development, and others. She also published peer reviewed chapters in several handbooks, such as: The Political Economy of Gangs in a Global Perspective, The Oxford Handbook of Kenyan Politics, The Handbook on Gender and Sexuality in Africa and Policing the Urban Periphery in Africa. She is now currently working on a book together with social justice activists about community organizing against police violence in Kenya. Before becoming Professor at THUAS, she was Assistant Professor 'Urban Governance and Development' at the International Institute of Social Studies in The Netherlands. She received her PhD on gangs, work and manhood with Honours, at the University of Amsterdam.