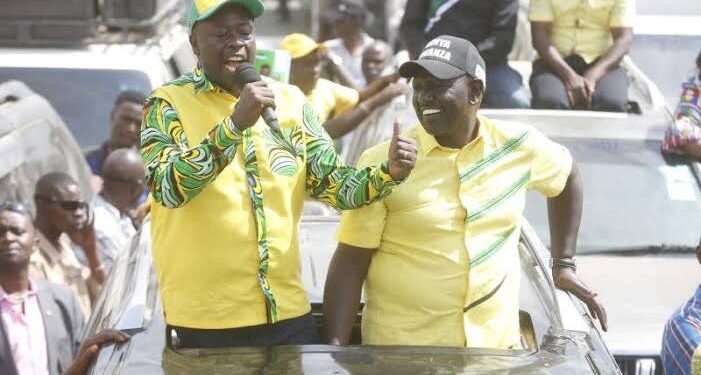 The Deputy President mentioned that Nakuru, has more than one million registered voters, but has always been left out after elections.

“Nakuru is always forgotten because people do not know whether to place it in the Rift Valley or Mount Kenya. This year, Nakuru will not disappear in the middle,” Ruto said.

“We will give you a Cabinet position and on top of that create 40, 000 jobs for the youth and execute an economic plan for the region.” he added.

While speaking during a Kenya Kwanza economic forum in Nakuru county on Thursday, May 19, the Deputy President said his government will focus on uplifting the lives of the common people and not to amend the Constitution.

“As you vote for Kenya Kwanza MPs, governor, Women Representative, MCAs and senator, know that you will be voting for a job for your son or daughter and for extra money in your pocket,” he said.

Moreover, Gachagua also stated that their government will be the people’s government. He promised to commit himself together with other leaders in the alliance to fight for Nakuru people in government, as the county despite being a vote-rich region has never been given a Cabinet position in government.

The Mathira MP encouraged the Kikuyu community to vote for Ruto come August 9, saying their interests will be well catered for in his government.

“We have so many votes which should all go to the Kenya Kwanza basket,” he said.

Others in attendance were Nakuru governor hopeful Susan Kihika, Kikuyu MP Kimani Ichung’wa among other host of aspirants for the various seats in the county.

“I left. Weta, Mutua, Kingi and even the President’s MP – Kuria – also left. So where will Raila get the votes?” Even the chairperson of Azimio has started showing signs of leaving. Why is he not coming out to campaign for his project?” Mudavadi said.

The ANC leader asked Kenya Kwanza leaders not to engage in rivalries ahead of the election.

“If you are in ANC, Ford Kenya, Chama Cha Kazi, UDA or any other member of Kenya Kwanza, remember friendly fire can kill,” he said.

Wetang’ula during his speech told residents of Nakuru that Kenya Kwanza government will deliver on its economic pledges.

“All that we have promised will mean nothing if you do not come out in large numbers and vote. There are more than one million voters in Nakuru. Let us put all those votes in one basket, the Kenya Kwanza basket,” he said.

On the other hand, Ichung’wa,  blamed Kenya’s economic problems on poor leadership, saying they are not caused by the war in Ukraine or any other reason.

“If you look at all sectors of economy, there is conflict of interest and state capture. They have deliberately and intentionally killed sectors of the economy as they pursue their personal interests,” he lamented.