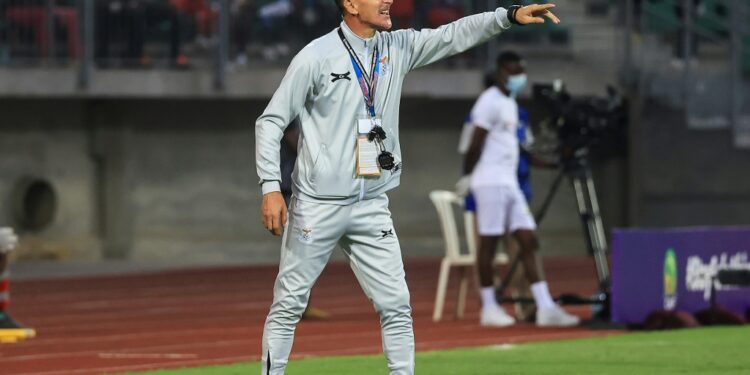 Forward Milton Karisa and goalkeeper Legason Alionzi were the toasts of Uganda after an upset 1-0 African Nations Championship (CHAN) win over Senegal on Wednesday in wet and chilly Algeria.

Captain Karisa scored the only goal on 33 minutes, pushing a lofted pass beyond goalkeeper Pape Sy off the body of Senegal defender Cheikhou Ndiaye.

Earlier in the opening half at the 19 May Stadium in the eastern coastal city of Annaba, Alionzi dived to his left and pushed away a Cheikh Sidibe penalty.

Uganda was awarded a second-half penalty for a challenge on Karisa by Ndiaye, but the referee changed his decision after viewing the incident on the touchline VAR monitor.

As Senegal sought an equalizer late in the second half, they were reduced to ten men when Libasse Ngom was shown a straight red card for a studs-up tackle.

The Karisa goal was the only one of a matchday 6 double-header in Annaba with two-time former champions the Democratic Republic of Congo and the Ivory Coast drawing 0-0 in the first match.

Goals have been scarce in Group B with four matches producing only two — the winners for Senegal over the Ivory Coast last Saturday and for Uganda over Senegal.

Uganda tops the table ahead of the final mini league fixtures this Sunday with four points, Senegal has three, DR Congo two and the Ivory Coast one.

All four nations can claim a top-two finish and qualify fot the quarterfinals in a tournament confined to footballers playing for clubs in their country of birth.

A draw for the Ugandans against the Ivorians in Algiers will secure the east Africans a last-eight places for the first time after five first-round exits.

Before beating Senegal, they had won just one of 15 group matches nine years ago against Burkina Faso in South Africa.

Serbia-born Uganda coach Milutin Sredojevic is an experienced CHAN campaigner having led Zambia to the quarterfinals of the last edition in Cameroon.

Ivory Coast also finished with ten men after Mohamed Zougrana was sent off against the Congolese having been shown a second yellow card for a dangerous tackle on Philippe Kinzumbi.

Government Not Responsible For High Cost Of Living – Oguna

CBK Survey to Reveal Breaches in Consumer Rights by Banks

Motorists Urged To Be Vigilant During President Elect Inauguration