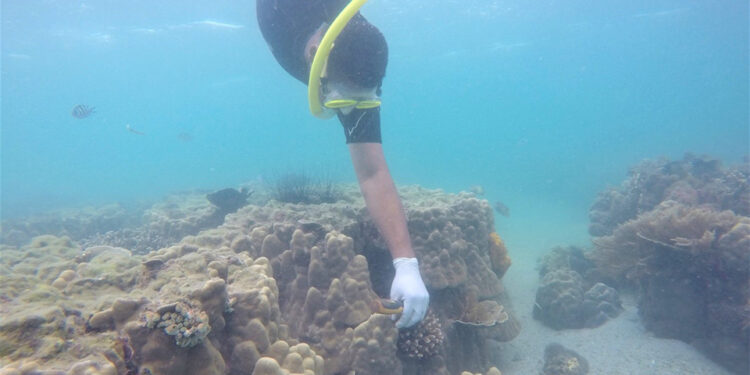 A diver plants an artificial coral on a reef on Wasini Island along the Kenya Coast.Women are leading a drive to restore dead corals on the Island.Photo/Coast Development Authority

In 2021, Aisha Mohamed,46, reunited with her husband  Salim Baya after three years of separation that was occasioned by what she describes as  climate change occasioned “domestic violence” and inability of her husband to provide for the family.

The mother of three was forced out of marriage after her husband, a fisherman on Kenya’s Wasini Island became violent not only to her but also to their children.

“It reached a point where he could no longer provide for the family. He became violent and that is when i chose to walk away for the sake of my children’s safety’’said Aisha

Wasini Island has in the past decades bore the brunt of climate change which has directly affected fishing and tourism,the main economic activities of the inhabitants.

On the island, climate change is not only impacting on the environment but also on the social and economic lives of the inhabitants.

Over time, rising ocean temperatures as well as water levels have led to the bleaching of corals on the island.

The destruction of coral reefs which form critical breeding sites for marine species led to declining fish stocks and death of tourism.

A 2013 survey by the Kenya Marine and Fisheries Research Institute (KMFRI), established that  60-90% of Wasini corals had been destroyed, according to Dr.James Kairu, a marine researcher at the institute

With reducing fish stocks in the waters, many fishermen were rendered jobless just like many tour guides who relied on tourism as a source of income because tourists stopped coming as well.

And with no source of income, many families fell apart, children dropped out of school while men and youth found solace in  drug abuse.

Ali Noor,34, a fisherman, says coral bleaching left many of the jobless because there was too little fish in the waters.

“There are times we would venture into the waters for the whole night and come out with almost empty nets,” he told The Kenya Times in an interview.

As a way of adapting to the climate change effects of coral bleaching and declining fish stocks, the wasini women group under the tutelage of the Kenya Marine and Fisheries Research Institute(KEMFRI), the Coastal Development Authority(CDA), and the National Environment Management Authority(NEMA) initiated  a coastal ecosystem restoration project to restore dead corals by planting artificial corals in the sea.

First, the women were offered training on the production of artificial corals.The corals are then planted within selected areas  which have artificial reefs.

The artificial corals are made and raised in nurseries managed by the women before being  planted on the artificial reefs.

The process of raising the corals in the nursery takes three weeks.

The women use locally available materials  like shoreline rock boulders and hydraulic cement, to make the artificial corals.

KMFRI says that the corals transplanted in this way have a survival rate of 75%.

The  local community chooses areas of the ocean where the corals are transplanted with the government of Kenya fully funding the project through the coast development authority.

Dr Kairu says KEMFRI wanted the community to fully own the coral restoration project and that is why it was brought on board.

“The involvement of the community in the project has worked beyond our expectations,” he said.

Kairu adds that the women-led coral restoration has helped revive the marine ecosystems that were staring at death.

“This project has breathed life back to the sustainable livelihoods of Wasini people,” said Kairu.

Jelvas Mwaura from KMFRI’s department of marine environment and ecology says many of the  transplanted corals  have survived.

“The transplanted  corals have provided new habitats for marine species,”.

“Fish populations in waters around the island have increased three times as much as in other areas,” Mwaura explained.

46-year-old Umar Noordin has been part of the project since 2018.She says that women have been the greatest beneficiaries of the project.

“ From this project, women have managed to create revenue streams through tour guiding, fish selling and operating of restaurants,”she said.

The mother of two says domestic disagreements and family breakups are not as many as they were before the project.

“Currently, women are able to help by supporting their husbands in providing for their families  and this has reduced the number of domestic based violence,”

“Initially our husbands would go away for long periods in search of fish in deep waters and this affected the social development of families,” said Umar.

For Rehema Musa ,a single mother of three, the  ecosystem rehabilitation project gave her a source of income and she now can comfortably take care of her family.

“Fishing has been booming as a result of the coral restoration .I can now be able to buy fish from fishermen and later sell to the people from the mainland and this has enabled me take care of my three children,”

“With my income from fish selling, I can now comfortably pay for their school fees ,clothing and medication,” she said

From fish selling, Rehema says she makes between USD 200-300 daily

26-year-old Hubah Balack  has been working as a tour guide for the past 5 years thanks to the coral restoration project.

She notes that the coral rehabilitation project brought back tourists on the island.

“With tourists coming to see the giant corals that the women have replanted, we now have  ecotourism as a source of income and this is putting money into our rockets,”she said.

“When tourists come, they pay some fee which goes to the women  involved in this project and to them that is a huge source of income, “said Balack.

Following the success of the coral reef restoration project, the women widened the net and moved towards the restoration and protection of the mangroves.

Initially the mangroves had been destroyed through illegal logging and charcoal burning .

The women have set mangrove tree nurseries  where they get seedlings for replanting in the forest.

So far, they have been able to plant 170,000 mangrove seedlings.

“Mangroves have helped in elevating the coastline which in turn works and helps in limiting effects of rising sea levels, “said Kairu.

According to the KMFRI, the rehabilitation of the wasini mangrove forests has also helped in securing coral reefs from sedimentation ,something which was a threat to the survival of corals.

Mohamed Keinan,Managing Director of the  Coast Development Authority   says the efforts by the women are paying dividends.

“The project has helped to restore and secure  marine and biodiversity on the island. It has also helped the community achieve food security,something which was a big problem before,”

30-year-old Said Abdallah who is recovering drug addiction disorder, says that the climate adaptation project helped him escape the yolk of drug use.

Abdallah had been rendered jobless due to dwindling fish stocks in the waters, something he says pushed him into depression and eventually into drug use.

“I was unable to provide for my  family and my wife to abandon me”.

Abdallah works with the women on the project by removing plastic waste, sand and other debris from the reefs and transplanting healthy coral fragments into the ocean.

Today Abdallah has remarried and earns at least $10-20 a day from fishing.

The project  has so far put some 230 women into  direct regular employment as tour guides, divers, conservationists, fish sellers  and restaurant   operators.

Wasini women group chairperson 42-year-old Swabrah Mohamed Ahmed, says that thanks to the project, pregnant women on the island can now easily access health services  due to the availability of community motorboats that were bought through proceeds earned from the project.

“We have been able to reduce cases of maternal deaths because we have boats on standby to act as ambulances for ferrying women who need both pre-natal and post-natal care to hospital, “said Swabrah.

Swabrah adds that the vice of drug abuse is a forgotten case on the island since nearly all the youth are busy engaging in income generating activities.

The Coast Development Authority is using  the success story of Wasini island as a blueprint for wider conservation work along Kenya’s coastline.

The authority has extended the Wasini lesson to the neighboring Pate Island in Lamu.

This story was written and produced as part of a media skills development programme delivered by Thomson Reuters Foundation. The content is the sole responsibility of the author and the publisher

Clifford Machoka Says Presidential Debate Will Be Held On July 26