by Jackson Okata
in Nairobi, Politics
0 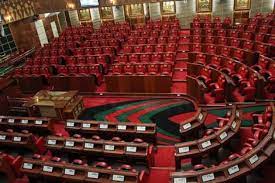 Parliamentary debating chambers.MPs are threatening to boycott house sittings should CDF money fail to be disbursed.Photo/Courtesy

Members of Parliament have threatened to go on strike over delayed disbursement of the National Government Constituency Development  (CDF) Funds.

The legislators say they will boycott house business if the National Treasury fails to  disburse the funds.

Minority Leader Opiyo Wandayi says he will move a motion for MPs to strike and refrain from any business until the NG-CDF is disbursed.

Wandayi notes that in the second quarter of the financial year there was no single disbursement made to the constituencies.

“If this house adjourns without a clear indication of when these funds will be disbursed, we stand the risk of going all the way up to the last quarter of the last financial year,” he stated.

“Failure to do that I will be moving the MPs to refrain from talks of recess or any business until the money hits our counties,” Wandayi said.

Ichung’wa wants lawmakers to constitute the NG-CDF committees to to avert continued  delays.

“There is nobody in the executive who should imagine that you are doing any MP a favour by disbursing NG-CDF.

“Our people are not waiting for us to go on recess, they want us to go and process their bursaries for term one school fees” Ichung’wa said.

Speaker Moses Wetangula directed Ichung’wa and Budget and Appropriation Committee Chair Ndindi Nyoro to engage the Treasury CS and issue a statement before the House on 15th November 2022.

NG-CDF was declared illegal by the Supreme Court.

The Apex court said that the kitty offends the division of functions between national and county governments.

Already MPs are proposing a bill to reinforce the National Government Constituency Development fund in the constitution.

The bill is co-sponsored by Matungulu MP Stephen Mule and his Gichungu counterpart Robert Gichumu.

The bill seeks to re-establish the Fund and its anchoring in law .