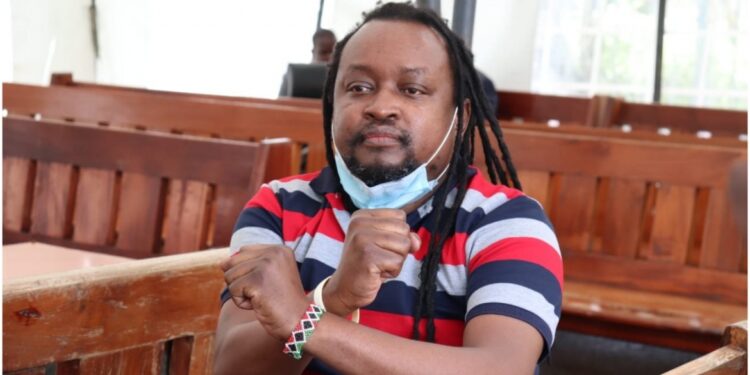 A Milimani court has released human rights activist Edwin Kiama unconditionally after the prosecution failed to provide sufficient evidence for his prosecution.

Senior resident magistrate Jane Kamau on Tuesday set the activist free and ordered that the cash bail of Sh500, 000 deposited in court be refunded back to him.

While releasing Kiama, Kamau dismissed the application by the prosecution saying that the gadgets obtained from him had been taken to the Communication Authority of Kenya and the report had not been availed.

The gadgets include phones and laptops obtained from Kiama.

Kiama’s lawyer requested the prosecution to release the phones and laptops confiscated from his client.

The case will be mentioned on May the 21st.

The court had last week declined to detain him for 14 days as requested by the prosecution after he was arrested over the wide circulation of a poster of President Uhuru Kenyatta.

Magistrate Kamau declined to grant the prosecution’s application, saying there were no compelling reasons tabled before the court to warrant such detention.

The court had also barred Kiama from mentioning the International Monetary Fund.

Kamau had ordered him to deposit in court KShs 500,000 and to be reporting to the investigating officer daily for 10 days.

In an affidavit filed before the court, officer Patrick Kibowen said he was investigating a case of suspected contravention of a number of provisions of the Computer Misuse and Cybercrime Act.

He said it also includes false publication contrary to Section 22(1) as read with Section 22(2) (b).

Kibowen added that the words amount to false publication contrary to the law.

US imposes sanctions on Sudan police for rights abuses