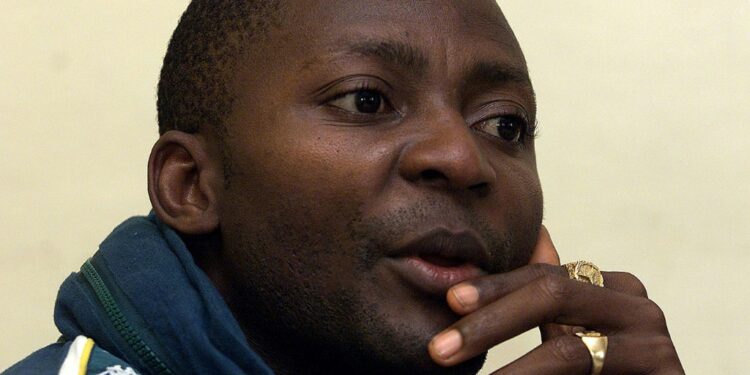 File picture from September 2001 of Gibril Massaquoi speaking to journalists at his home in Makeni, Sierra Leone | AFP

The trial was taking place in the Finnish city of Turku, about 170 kilometers (106 miles) west of Helsinki.

Massaquoi, who moved to Finland in 2008, is accused of murders, rapes, and war crimes.

The first day of the trial was to include decisions on witness confidentiality and the presentation of the case by both the prosecutor and Massaquoi’s defense.

The trial will subsequently move to Liberia and Sierra Leone to hear witness testimony before returning to Finland.

“The main trial will start in Turku in January 2023 and will continue in Liberia for about two months from the beginning of February,” the Turku Court of Appeal said.

It ruled that the prosecution had “not proven with sufficient certainty” that he had been involved in the crimes, which occurred in the later years of Liberia’s second civil war.

The impoverished West African state was plunged into a first war which ran from 1989 to 1998, followed by a second, from 1999 to 2003. As many as a quarter of a million people died, according to some estimates.

Massaquoi was arrested in Finland in 2020 after a rights group investigated his war record and was held in custody for around two years pending the trial.

The district court ordered his release in February pending the April verdict, when he was acquitted.

Massaquoi was formerly a senior commander of the Revolutionary United Front (RUF), a Sierra Leonean rebel group that fought in Liberia.

He denies all the charges, arguing that he was not in Liberia when the alleged offences took place.

Gachagua Says He Never Served As D.O In Molo Under Moi

Tribalism And The Voting Patttern In Kenya