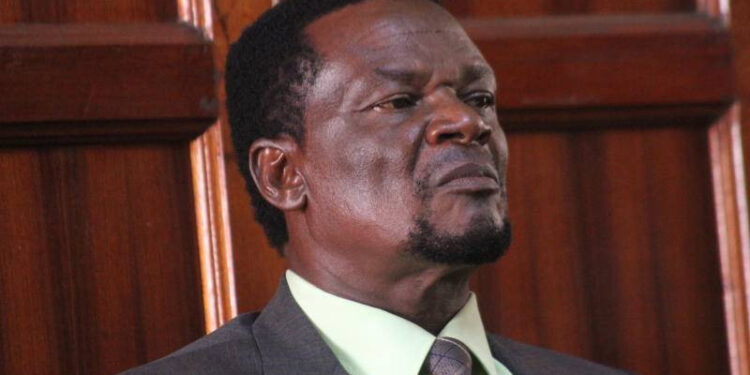 Sirisia Member of Parliament John Waluke has been released on a Ksh.10 million cash bail by the Court of Appeal awaiting appeal on his 67-year jail term.

Waluke had appealed the 67-years jail term late last month terming it as harsh and unwarranted.

Moreover, the Sirisia MP’s sentencing came following a graft case in which he was accused of defrauding the National Cereals and Produce Board (NCPB) Ksh.313 million.

He was charged alongside Grace Sarapay Wakhungu, and Erad Supplies & General Contracts Limited (Erad); a company where the two are shareholders.

In addition, Waluke and Wakhungu, were supposed to supply 40,000 metric tonnes of maize to NCPB in 2004 through their company but ended up pocketing Ksh.313 million without supplying even a single grain of maize.

However, the tender was cancelled after Erad Supplies, a company in which the late businessman Jacob Juma was also a director, failed to prove it had sufficient funds to supply the maize.

Nonetheless, the company sued NCPB claiming that it had already procured the Maize from Ethiopia by the time the tender was being cancelled. The said maize was being stored by Chelsea Freight, a South African firm, in Djibouti.

Through his lawyer Elisha Zebedee, Waluke urged the Appellate court to determine whether payment of monies made pursuant to court proceedings arising from an arbitral award and payment made pursuant to a garnishee order can sustain a criminal charge and conviction.

Moreover, the Sirisia MP also wants the judges to determine whether a director of a company in the position he was in, and for whom there is no evidence in record that he was involved in the day-to-day running of the company and was also not involved in the transactions, is criminally culpable for a transaction that he never participated.

Furthermore, Waluke wants the Court of Appeal to rule whether the High Court and Magistrates Court had the jurisdiction to sentence him to serve the terms on behalf of the company.

Nonetheless, the Office of the Director of Public Prosecutions (ODPP) led by Alexander Muteti and Victor Awiti asked the Appellate court to dismiss Waluke’s application to be released on bail terming it as hopeless.

“Applicant was properly convicted and sentenced and is therefore, until the impugned decision is overturned, serving a lawful sentence emanating from a concurrent finding of the subordinate court and the superior court,” Muteti told the court.

A Member of Elite Police Squad Commits Suicide in Lamu

Ethiopia’s Tigray military conflict: Six months on and no end in sight

Fell asleep a princess, awoke a queen: Elizabeth in Kenya