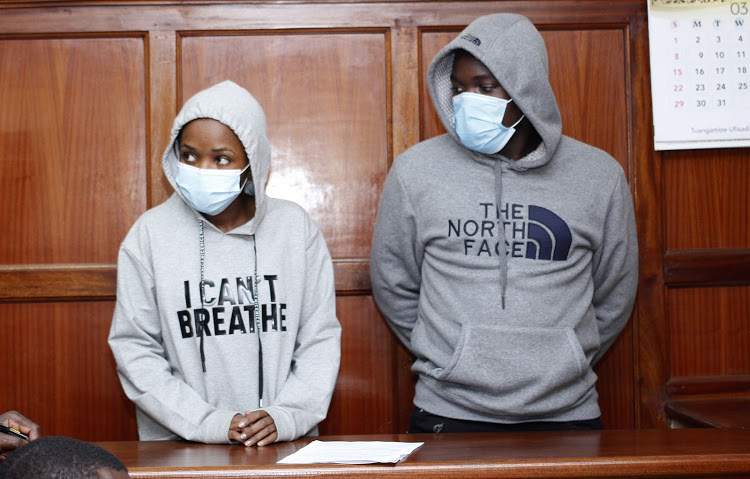 JKUAT student Anne Wambui and Antony Ngigge at the Milimani law Court where they were charged with conspiracy to defraud NCBA Bank Kshs.190,767,195.They were released on Khs.500000 cashbail on October 26,2020.PHOTO/COURTESY.

Two Information, Communication and Technology (ICT) students accused of stealing Sh24.4 million after hacking into a local bank system and are also said to have attempted to move another KSh 190.7 million.

The duo, from Jomo Kenyatta University of Agriculture and Technology (JKUAT), was on Monday charged with conspiring to defraud NCBA Bank of over Sh190.7 million and stealing KSh 24.4 million.

Antony Mwangi Ngige, 23, and Ann Wambui Nyoike, 21, are alleged to have committed the offense between October 20 and 22, this year.

The prosecution said the two students conspired to defraud the lender with others who are yet to get arrested.

According to the prosecution, the first accused, Mwangi Ngige, is said to have alerted the bank via Twitter about the systems hitch that he discovered through NCBA mobile app.

“It is the first accused, Ngige, who initiated his prosecution process by informing bank authorities that there was a hitch in its system,” the Magistrate was told by their lawyer.

The defense argued that Mr. Ngige is a whistle-blower who has now turned into a suspect.

The lawyer further argued that when the bank failed to check on the matter, his client then decided to send a text message to the bank.

“The accused took it upon himself and wrote an SMS (a short text messenger) to the bank about the anomaly,” said the lawyer.

Following the SMS, the bank management summoned him on Saturday.

He presented himself, and again they were asked to report today (Monday), after which Ngige and Ms. Nyoike were arrested and later brought before the court.

“I urge this court to release the suspects on a reasonable cash bail of Sh100,000 given that they are students and not financially able to raise a substantial amount,” the lawyer urged Ms. Njagi.

The prosecuting counsel, Ms. Winnie Moraa did not object to their release on bond.

But she asked the court to consider the colossal amounts involved and impose more stringent measures.

In her ruling, the Magistrate ruled out that everyone is entitled to bail.

Ms. Njagi ordered that each of the accused to deposit a bond of KSh 2 million with one surety of a similar amount or deposit a cash bail of KSh 500,000 each.

She directed that the case be mentioned virtually on November 10, 2020, for pre-trial directions.

Karua Pleads With Kenyans To Turn Out And Vote

Anerlisa Mungai Thanks Her Lawyers As Divorce With Ben Pol Finalises