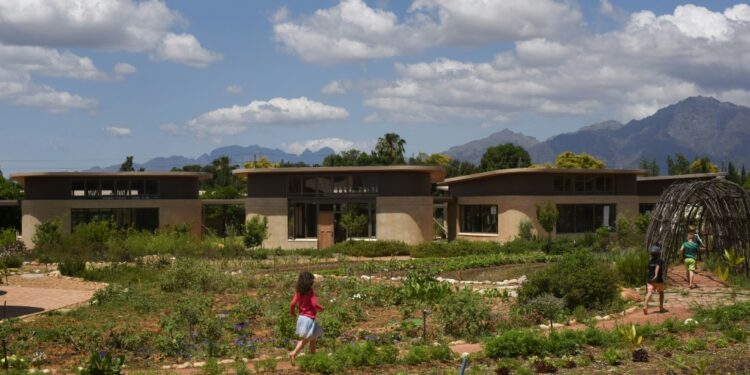 Unlike most other South African schools, uniforms are not required at this institute nestled in a privileged corner of the country | AFP

The sound of chirping birds drowns out the noise of passing cars near a school on the southern tip of Africa, where pupils plant cabbages, mix compost and climb trees.

Founder Alba Brandt, said she produced the idea in 2017 after spending six months at a similar initiative in Bali, Indonesia, for what was supposed to be a family adventure with her husband and three daughters.

“It changed our whole lives,” said the 44-year-old ex-accountant sporting a pair of Bermuda shorts and a coral hoodie, her hair pulled up in a loose bun.

“I realized there was so much more to education than to sit still, in your uniform, be quiet and regurgitate what is written on the blackboard,” she told AFP of the school, located about sixty kilometers (37 miles) from Cape Town.

Unlike most other South African schools, uniforms are not required at this institute nestled in a privileged corner of the country, rich in plant life and vineyards.

The school, which opened last year, is built on a former horse paddock, where the “land was dead, trampled”, said Brandt.

“We started planting two years ago, with endemic plants, no chemicals. And biodiversity returned, butterflies and bees… and porcupines.”

Snakes are also known to hide in some bushes where children know they should not play on hot southern spring days.

The school grounds boast playgrounds with swings, huts, and sandboxes, while the canteen’s zero-waste kitchen serves only vegetarian meals.

The school serves all grade age groups from nursery school to secondary, with about 170 pupils currently enrolled.

Classes are small, with twenty pupils and two teachers.

Teaching is bilingual, in English and Afrikaans, reflecting regional demographics and follows a thematic approach, with the topics studied across subjects.

“There should be a coherence to what they’re learning”

“Green School” is not about “downloading contents” into pupils’ brains but wants them to “think critically” in line with 21st century learning skills, said the 62-year-old educator.

“This is how I used to teach behind closed doors at my old school, now I can share with parents,” said primary school teacher Esbie Binedell, laughing. “It’s somewhat messy, (but) we would dig into a subject matter until the children were done with questions”.

Fees are high, and the government provides no funding. A scholarship system is being planned but will take time.

The school’s founder said it was not enough to be “the quirky mum who recycles and makes homemade food”.

“You can drive that alone but it’s hard and probably not successful.

“Community is so much stronger”.

Despite the environmental focus, teachers opt for a light touch when discussing the ravages of global warming.

“We introduce problems very slowly, to avoid anxiety and ecophobia. Mostly with the older kids. We start with problems the size of a village, then a town, then a whole country, progressively,” said Brandt.

The green school, with its progressive agenda and innovative approach, above all seeks to arm students with the tools to think critically while developing their creativity.