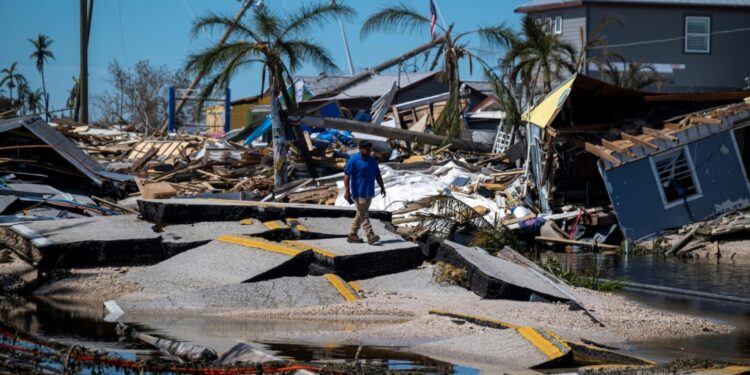 A devastated area in Matlacha, Florida seen on October 1, 2022 after it was hit by Hurricane Ian, one of the most powerful storms to ever hit the United States | AFP

UN chief Antonio Guterres warned world leaders at a climate summit in Egypt on Monday that humanity faces a stark choice between working together or “collective suicide” in the battle against global warming.

One hundred heads of state and government are meeting for two days in the Red Sea resort of Sharm el-Sheikh, facing calls to deepen emissions cuts and financially back developing countries already devastated by the effects of rising temperatures.

“Humanity has a choice: cooperate or perish,” Guterres told the UN COP27 summit.

“It is either a Climate Solidarity Pact or a Collective Suicide Pact,” Guterres said, urging richer polluting nations to come to the aid of poorer countries least responsible for the emission of heat-trapping gases.

Nations worldwide are coping with increasingly intense natural disasters that have taken thousands of lives this year alone and cost billions of dollars — from devastating floods in Nigeria and Pakistan to droughts in the United States and Africa and unprecedented heatwaves across three continents.

“We have seen one catastrophe after another,” said Egyptian President Abdel Fattah al-Sisi. “As soon as we tackle one catastrophe another one arises — wave after wave of suffering and loss.

“Is it not high time to put an end to all this suffering?”

But a multitude of other crises, from Russia’s war in Ukraine to soaring inflation and the lingering effects of the Covid pandemic, has raised concerns that climate change will drop on the priority list of governments.

Guterres, however, told world leaders climate change could not be put on the “back burner”.

He called for a “historic” deal between rich emitters and emerging economies that would see countries double down on emissions, holding the rise in temperatures to the more ambitions Paris Agreement target of 1.5 degrees Celsius above the pre-industrial era.

Current trends would see carbon pollution increase 10 percent by the end of the decade and Earth’s surface heat up 2.8C.

“We are on a highway to climate hell with our foot still on the accelerator,” Guterres said.

The UN secretary general said the target should be to provide renewable and affordable energy for all, calling on the United States and China to lead the way.

He also said it was a “moral imperative” for richer polluters to help vulnerable countries.

Chinese leader Xi Jinping, whose country is the world’s top emitter of greenhouse gases, is not attending the summit.

US President Joe Biden, whose country ranks second on the top-polluters list, will join COP27 later this week after midterm elections on Tuesday that could put Republicans hostile to international action on climate change in charge of Congress.

French President Emmanuel Macron urged the United States, China, and other non-European rich nations to “step up” their efforts to cut emissions and provide financial aid to other countries.

“Europeans are paying,” Macron told French and African climate campaigners on the sidelines of COP27. “We are the only ones paying.”

On Sunday, the heads of developing nations won a small victory when delegates agreed to put the controversial issue of compensation for “loss and damage” on the summit agenda.

Pakistan, which chairs the powerful G77+China negotiating bloc of more than 130 developing nations, has made the issue a priority.

The United States and the European Union have dragged their feet for years on the proposal, fearing it would create an open-ended reparations framework.

Guterres said COP27 must agree on a “clear, time-bound roadmap” for loss and damage that delivers “effective institutional arrangements for financing”.

“Getting concrete results on loss and damage is a litmus test of the commitment of governments to the success of COP27,” he said.

Rich nations will also be expected to set a timetable for the delivery of $100 billion per year to help developing countries green their economies and build resilience against future climate change.

The promise is already two years past due and remains $17 billion short, according to the OECD.

COP27 is scheduled to continue until November 18 with ministerial joining the fray during Week Two.

Security is tight at the meeting, with Human Rights Watch saying authorities have arrested dozens of people and restricted the right to demonstrate in the days leading up to COP27.