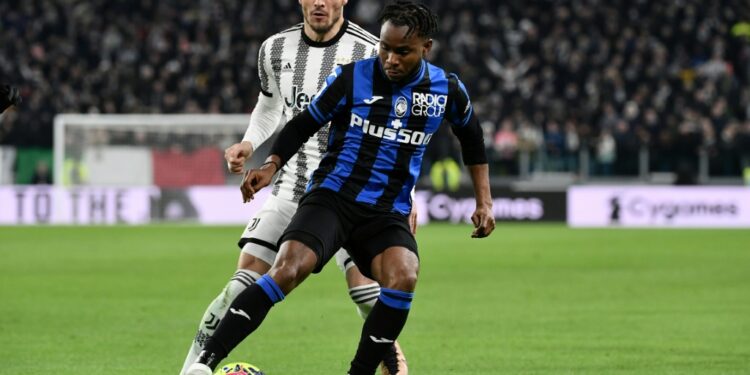 Lookman notched the first and third goals for Atalanta and created the second in a thrilling 3-3 draw with Juventus.

He has scored eleven times in Serie A this season, two less than chart-topper Osimhen, whose tap in sealed a 2-0 win for leaders Napoli at Salernitana.

Ouattara made an immediate impact on his Bournemouth debut. The Burkina Faso winger set up Jaidon Anthony for the Cherries’ first league goal in six games. That strike was not enough for victory in a 1-1 draw with Nottingham Forest that saw Bournemouth drop into the bottom three on goal difference.

Former African Footballer of the Year Mahrez failed to add to his fine scoring form of late but did grab an assist as City swept aside Wolves 3-0. The Algerian pounced on a poor pass from Wolves goalkeeper Jose Sa to tee up Erling Haaland to complete a hat-trick.

In his debut Serie A season, Lookman gave Atalanta an early lead thanks to a Wojciech Szczesny error, set up Joakim Maehle’s leveller and then thumped home a superb header which would have given the away side all three points had Danilo not levelled midway through the second half.

Napoli have put a £130 million ($160 mn/150 mn euros) price tag on the 24-year-old, who has been linked with Manchester United. He struck two minutes into the second half, pouncing on a rebound off the post as Napoli took a 12-point lead over second-placed AC Milan, the defending champions.

After six months of treatment for testicular cancer, Haller returned in Dortmund’s thrilling 4-3 win over Augsburg. Coming on after 62 minutes with the score at 2-2, Haller brought the 80,000-strong crowd to its feet and played a key linking role as Dortmund fought back to win the game. It was Haller’s first competitive appearance in a Dortmund shirt, as the Ivory Coast forward was diagnosed just days after joining the club from Dutch side Ajax in mid-2022.

Choupo-Moting picked up where he left off before the World Cup, scoring a first-half goal as Bayern drew 1-1 at Leipzig. Choupo-Moting tapped in a Serge Gnabry cross in 37 minutes to give Bayern the lead and proved a constant threat to the home defence.

MPs Walk Out of an Induction Workshop in Mombasa

Bahati Wanted To Kill Himself After Failing To Get Mathare MP Seat, Ringtone Claims