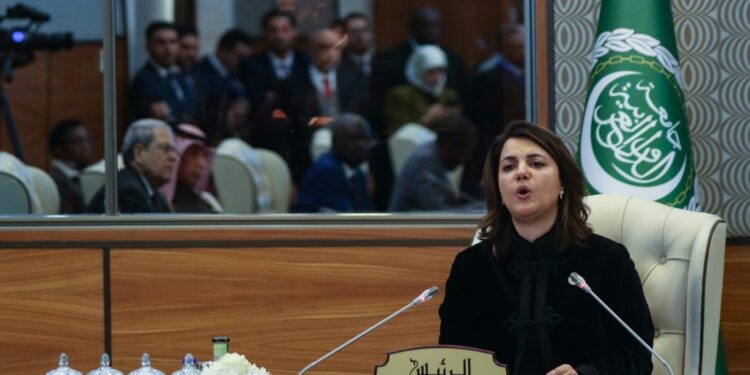 Major Arab states boycotted a ministerial meeting hosted by Libya’s interim government on Sunday, with just five of the Arab League’s 22 members sending their top diplomats and even the bloc’s secretary general staying away.

The snub underlines Arab divisions over the Tripoli-based government, whose legitimacy is contested by a rival administration in the war-scarred country’s east.

Regional heavyweights Egypt, Saudi Arabia and the United Arab Emirates were not represented at all at the gathering — a preparatory session ahead of a foreign ministers’ meeting in Cairo.

Najla al-Mangoush, foreign minister in the Tripoli-based administration, condemned what she called “attempts by certain sides to crush Libyans’ desire to transform Arab solidarity into a reality”.

Libya, which holds the rotating presidency of the organization, is “determined to play its role in the Arab League (and) rejects any attempt to politicize the League’s founding documents,” she said.

Libya fell into a decade of violence following the 2011 overthrow of dictator Moamer Kadhafi in a NATO-backed rebellion.

Since March last year, an administration in Libya’s east backed by military leader Khalifa Haftar — who has been close to Russia and Egypt — has challenged the government of Prime Minister Abdulhamid Dbeibah, arguing it has outlived its mandate.

The head of the rival government thanked Egypt, Saudi Arabia, and the UAE for “declining to take part in the theatrics through which the expired government tried to portray itself as being internationally recognized.”

In a tweet, Fathi Bashagha also urged Libya’s western Neighbours Algeria and Tunisia, who did send foreign ministers to the meeting, to “review their policies towards Libya and not to be fooled by a government whose mandate has ended”.

The Tripoli-based unity government was the product of a United Nations-mediated peace process following the country’s last major battle in 2020.

Omtatah Petitions the Appointment of New Court of Appeal Judges