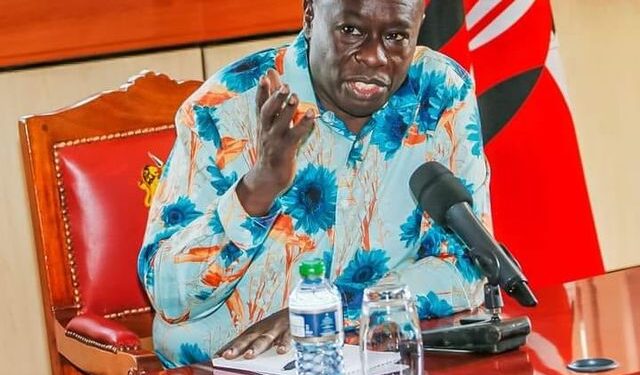 Deputy President Rigathi Gachagua. He says he will get rid of cartels from the tea sector .Photo/Courtesy

The Assets Recovery Agency (ARA) has made a u-turn on Ksh200 million that the government forfeited from Deputy President Rigathi Gachagua.

The cash, held at Rafiki Microfinance Bank, was forfeited as part of a graft case against Gachagua.

The government forfeited the money in July 2022.

Initially, the DCI had told the court that the funds were acquired illegitimately.

The monies were paid to companies linked to Gachagua by the Bungoma County government and other government institutions between 2011 and 2016.

ARA says after conducting its own independent investigation, it found that the money was legitimately acquired.

The agency states that the cash is not proceeds of crime.

Sergeant Fred Musyoki, a detective attached to the ARA told the court that the evidence obtained satisfactorily shows the source and legitimacy of the funds.

He added that the ARA is satisfied that the same is not proceeds of crime as was initially perceived and should be released to Gachagua and Anne Kimemia.

According to Musyoki, the companies met their obligation as per the terms and conditions of the contracts.

This comes barely two months after the DPP withdrew a Ksh7.5 billion graft case that was facing the Deputy President.

Gachagua has on several occasions said that the cases that were instituted against him were politically motivated.

Last year, Gachagua told a meeting in Baringo that more high ranking cases that were politically motivated would be dropped.

Carnival of Trumpets and Colour Returns to Cape Town

Wreck of Titanic Detected 4,000 Meters below the Surface