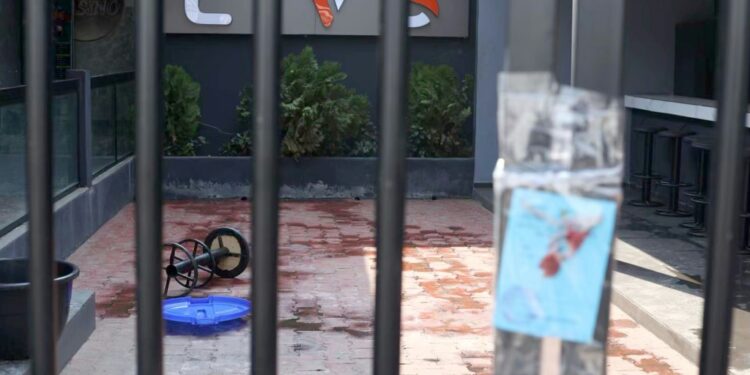 The fire engulfed the main room of Liv's Night Club in the capital's upmarket Bastos district, home to embassies and diplomat residences | AFP

Cameroon’s government said Sunday that 16 people were killed in a fire caused by fireworks in a nightclub in the capital Yaounde, the tragedy occurring as the nation hosts the Africa Cup of Nations football tournament.

“The initial report shows 16 dead and eight seriously injured” after the “accidental fire” broke out Saturday night, the communications ministry said in a statement.

The fire engulfed the main room of Liv’s Night Club in the capital’s upmarket Bastos district, home to embassies and diplomat residences.

“The tragedy, which was caused by explosions from the fireworks often used in these places, first consumed the building’s ceiling, resulting in two very loud explosions, causing panic and a stampede,” the ministry said.

“When we arrived it was a panic, there was a strong fire with lots of smoke,” an official with the firefighters told AFP on condition of anonymity.

“We counted 16 dead and five injured,” the official added.

A security guard present for the fire said that “it happened very quickly”.

“It was a little after 2:00 am and most customers arrive around 3:00 am… there are many victims,” the security guard said.

There were some burnt objects out the front of the club that suggested a fire, but the building’s facade was not destroyed or charred, an AFP journalist said.

Cameroon is hosting the AFCON tournament despite regular violence in the country’s west, where English-speaking militants declared independence from the majority French-speaking country in 2017.

Both the separatists and government forces have been accused of atrocities in the fighting, which has claimed more than 3,000 lives and forced over 700,000 to flee their homes.

Around 100 people gathered outside the morgue of the military hospital in Yaounde’s Ekounou neighborhood, hoping to find out news of relatives.

“I don’t have any information. I woke up this morning and they told me that my 38-year-old son is dead,” said one woman, who gave her name as Fidele.

“I was waiting for my brother and his friends yesterday evening, but they didn’t arrive. And at around 7:00 am, I received a lot of phone calls asking whether my brother was dead or alive. So I came to the morgue and I identified his body,” said her daughter, Claude.

“He was a good, kind boy who has been working in this club for about two months. When I heard about the explosion, I came to the morgue where I was told he was dead.”

In Douala, the economic capital in the south of the country, at least five discos have been partially or completely burned down in accidental fires over the past six years.