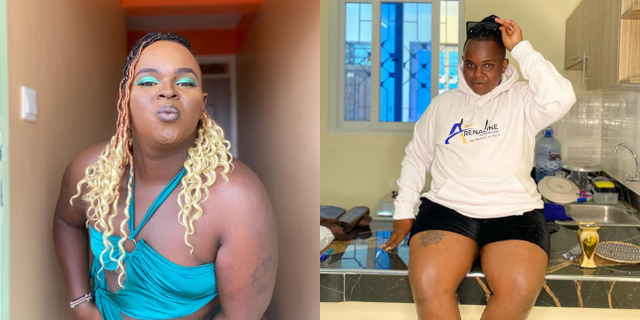 Kinuthia, whose other name is Kelvin has disclosed that he is very single and, in the market, ready to try something out with any interested individual.

This, Kinuthia revealed during an interview with Oga Obinna on his show KulaCooler Show when he was asked if it is true, he is dating an old man, otherwise known as Mubaba.

In fact, Kinuthia strongly refuted the claims and held that he has never dated any mubaba in his life.

The crossdresser made it clear that he has a liking for young people and not old men as earlier alleged by socialite Manzi Wa TRM.

”A Mubaba? I am not a husband snatcher, which mubaba? I have never dated any mubaba all my life. At the moment I am not dating anyone, I am in the market. I have never had anyone to sponsor my life,” Kinuthia said.

Also Read: Jalango Distances Himself from Diana Marua, Denies Ever Ever Chewing Her

Kinuthia, through the interview also distanced himself from claims that he has been scamming men off their hard-earned money.

It should be noted that Kinuthia had earlier been exposed by a random Kenyan man who claimed he had sent the crossdresser KSh 344,000, an expensive phone, and shopping thinking he was a lady.

According to the Mombasa-based man, Kinuthia had promised him that he will travel to Mombasa where they would have fun together.

However, Kinuthia went mum and even blocked the man who was forced to expose him online.