The EAC trade value was recorded at $10.17 billion representing a 20% share of Intra-trade to global trade by September 2022 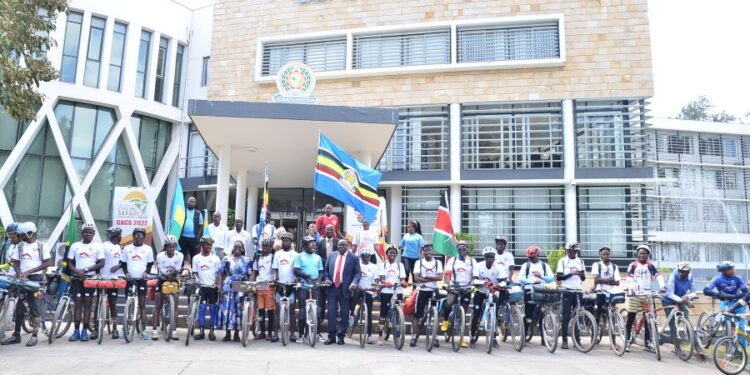 Lifting of COVID-19 restrictions also contributed to the rise in trade among member states.Photo/EAC

Intra-regional trade within the East African Community (EAC) is on an upward trajectory, standing at US$10.17 billion in September 2022.

By September 2022, the EAC trade value was recorded at $10.17 billion representing a 20% share of Intra-trade to global trade.

According to EAC Secretary General Hon. (Dr.) Peter Mathuki, the increase is attributed to political goodwill among the members of the Summit of EAC Heads of State.

Dr. Mathuki said that high-level discussions among the Heads of State had eliminated many Non-Tariff Barriers (NTBs) hampering intra-regional trade.

Mathuki says the lifting of the tariffs will help raise the level of intra-regional trade in East Africa to at least 40% over the next five years.

He disclosed that EAC’s total trade with the rest of the world stood at US$62 billion.

Mathuki spoke during a five-day retreat for all EAC Staff held at Maanzoni Lodge in Machakos County.

“From 1st July 2022, imports of locally available goods into the region; such as meat, furniture and textiles, have been attracting a tariff of 35 percent. The move aims at promoting local production, value addition and industrialization,” said Dr. Mathuki.

On the East African Monetary Union, Dr. Mathuki said that the bloc would have a single currency within the next four years.

He said that the Council of Ministers is expected to make a decision soon on the location of the East African Monetary Institute, the precursor to the East African Central Bank that will issue the single currency.

“The single currency will ease business and movement of persons within the region. It is in line with our goal to make the region border-less so that people can move and trade freely envisioned in the Common Market Protocol,” he said.

I am a Tailor Too - Former Attorney General Githu Muigai Reveals

CS Matiang’i: Miguna Only Needs To Fill A One-Page Document For Citizenship Re-registration To Return To Kenya

Farmers Urged to Embrace Use of Donkey Waste for Pest Control