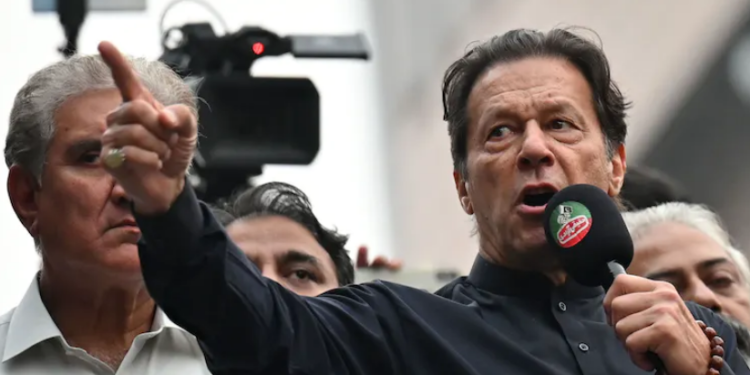 Pakistan’s former prime minister Imran Khan survived what supporters described as an assassination attempt on Nov. 3, 2022, as he led protests against the government.

Khan, a former national sports hero turned political leader, was shot in the leg, as he led a march to the country’s capital Islamabad.

What was Khan doing when the assassination attempt was made?

Khan was in the process of leading a lengthy protest march when the attack happened.

Having been ousted from power in a no-confidence motion earlier in the year, Khan is pushing for new elections to take place immediately in a bid to oust his successor, Prime Minister Shehbaz Sharif.

The current government has said elections will take place in a year’s time, as planned, despite the ongoing protests.

Khan says that his ouster in April was caused by outside forces, including the United States. He is also protesting a recent decision by the Election Commission of Pakistan to ban him from holding public office for five years.

The protest march began on Oct. 28, 2022, and has been inching towards Islamabad, the country’s capital, from the city of Lahore. It is part of a strategy to increase Khan’s popularity and exert pressure on the government to hold new elections. Khan has said that he is prepared to continue his protest for months, if necessary. The tactic follows a similar successful series of rallies after the 2013 elections that helped propel Khan to office in 2018.

Why is he seeking immediate elections?

First off, he doesn’t accept the legitimacy of his ouster. But a big part of this is the appointment of Pakistan’s next army chief. The current head of the army, General Qamar Javed Bajwa, is due to retire on Nov. 29. Under Pakistan’s constitution, it is the prerogative of the serving prime minister to appoint the army chief – so at present, that would be Khan’s political rival Sharif, who took over as the country’s leader in April.

The reason this is so important is that support of the military has traditionally been crucial for governments in Pakistan. Put simply, without the support of Pakistan’s army, no political party can remain in power for long.

As a result, Khan sees it as crucial for any future success that he has a say in who is appointed the next army chief – and for that to happen he, or his party, needs to be in government.

But the idea of a loyal Army chief is a myth. The current chief was given an extension by Khan and although their relationship started off well, it later soured.

How popular is Khan’s campaign?

His protests have garnered huge crowds and seen his popularity surge – with a big chunk of the Pakistani youth seemingly behind him.

You have to remember that Khan was already a hugely popular figure in the country – he is a former captain of the national cricket team who presents himself as an anti-corruption politician.

Khan has also been able to play on the unpopular decisions by the current government.

It was forced into an unpopular financial bailout from the International Monetary Fund and has suffered over its handling of devastating floods in the country – about a third of the country was under water in September and some 11 million people are facing severe food insecurity.

With this as a backdrop, I think it is fair to say that Imran Khan is currently winning the propaganda battle with the government.

What is happening with Khan’s campaign now?

It was clearly an unfortunate incident, but the attempt on his life might work to his advantage. It could draw sympathy, invigorate the campaign and add to his popularity.

But will it solve the political stalemate or increase the chances of early elections? Or mean he has a say in who gets appointed the next Army chief? I don’t know, but I think it is unlikely.

In Pakistan, it is easy to muster up anti-establishment, anti-government sentiment, but a lot harder turning that into action. Khan can certainly exert pressure on the government. But the question is: will that be enough to force it into giving in to his demands or cutting a deal?

That said, Khan has been resolute that he will not give up his campaign. He has previously said that what is happening with his march amounts to a revolution taking over the country – with the only question being whether the revolution will be brought about via the ballot box or through bloodshed. I – and many others – will be hoping for the former.

Tragically, no. The history of Pakistan has been dotted by assassinations and attempts on the lives of both serving and former prime ministers.

Pakistan’s first Prime Minister Liaquat Ali Khan was shot in front of a crowd in 1951, and later died in a hospital. More recently, former prime minister – the country’s first female leader – Benazir Bhutto was assassinated in a gun and suicide bomb attack while campaigning in Rawalpindi in 2007. Imran Khan himself has been subjected to numerous threats in the past.

Some of these acts of political violence have led to lasting consequences. Liaquat Ali Khan’s assassination led to a shift away from democracy for Pakistan, for example.

The next few weeks will be crucial, and the fear is there will be an escalation of violence. Khan’s party, Pakistan Tehreek-e-Insaf, or PTI, has vowed to “avenge” the attack but the wounded leader himself has called on supporters to remain peaceful. Meanwhile, the PTI has said it will continue with the protest march.

In an apparent attempt to tamp down tensions, the Pakistani government has said it is willing to negotiate with Khan – but it isn’t clear yet what the substance of the proposed negotiations will be, what they could yield or whether Khan will agree to talks.

Ayesha Jalal is the Mary Richardson Professor of History at Tufts University. After majoring in history and political science at Wellesley College, she obtained her doctorate in history from the University of Cambridge. Jalal has been Fellow of Trinity College, Cambridge (1980-1984); Leverhulme Fellow at the Centre of South Asian Studies, Cambridge (1984-1987); Fellow of the Woodrow Wilson Center for International Scholars in Washington, D.C. (1985-1986); and Academy Scholar at the Harvard Academy for International and Area Studies (1988-1990). From 1998-2003 she was a MacArthur Fellow. Her publications include "The Sole Spokesman: Jinnah, the Muslim League and the Demand for Pakistan," "The State of Martial Rule: the Origins of Pakistan’s Political Economy of Defence," and "Democracy and Authoritarianism in South Asia: a Comparative and Historical Perspective." Jalal has co-authored "Modern South Asia: History, Culture and Political Economy" with Sugata Bose. Her study of Muslim identity in the subcontinent, entitled "Self and Sovereignty: the Muslim Individual and the Community of Islam in South Asia since c.1850." Her most recent book is "Partisans of Allah: Jihad in South Asia."