Kenya Has Lifted its Ban on Genetically Modified Crops: The Risks and Opportunities 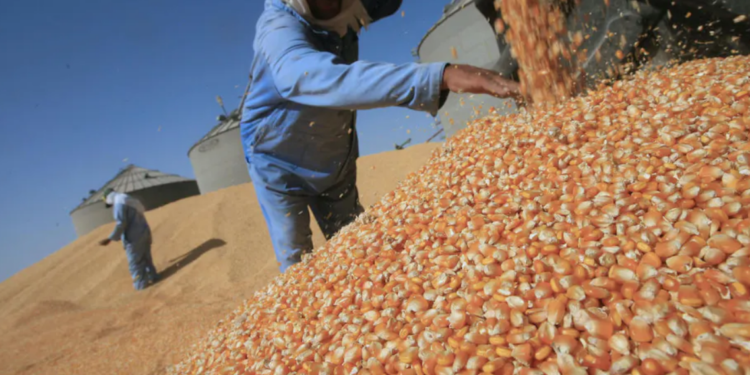 An Egyptian worker gathers the crop at a maize field, the country’s first harvest of genetically modified maize in 2008. Khaled Desouki | AFP via Getty Images

Kenya recently lifted a ban on the cultivation and importation of genetically modified crops amid the worst drought in 40 years and soaring food prices. This includes white maize, the country’s main staple. The decision was welcomed by scientists who see GM crops as the answer for food security. But it is opposed by a spirited lobby who are concerned about potential risks to health and the environment. Benard Odhiambo Oloo, who is a food safety and quality expert, provides insights into the debate.

Genetically modified organisms (GMOs) refer to plants, microbes or animals that have had their genetic make-up altered through the introduction of a select gene from another unrelated species. For crops this is usually for the purpose of conferring a desired characteristic such as increased yield, insect tolerance or drought resistance, among others.

Genetic engineering refers to the science involved in the selection of desired genes responsible for specific traits from a species and transferring them into the genes of another organism, thus modifying the second species’ genetic makeup.

Humans have been improving the quality of domesticated crops for thousands of years. But this has mostly been through conventional breeding, where important traits are encouraged, selected and passed down from one generation to the next.

Conventional breeding would typically take 10-15 years. The turnaround for genetic engineering is usually less than five years. But, due to the strict regulations on commercialization, most GM crops have been in the pipeline for decades, especially in Africa.

How prevalent is their cultivation in Africa?

The approval and cultivation of GMOs in Africa has been slow.

Only a few countries have allowed their commercialization. South Africa has been a leader in adoption of GMO crops in Africa and has had experience spanning over a decade. The number of countries in Africa where GM crops are cultivated has grown from three in 2016 to 10 by 2022.

These 10 countries have commercialized different types of GMO crops.

Apart from South Africa, Egypt, Sudan, Ethiopia, Burkina Faso, Malawi, Nigeria, Ghana and eSwatini have allowed the planting of GMO seeds. A number of other countries are at different stages of development and commercialization of a number of GMOs.

This year Ghana approved the release of pod borer resistant cowpea, thus joining the growing list of African countries to commercialize GM crops. This is the first genetically modified crop to be approved in the country.

In December 2019 the Kenyan government gave the nod for the commercialization of GMO cotton. After more than two seasons of growing GM cotton, Kenyan farmers have expressed satisfaction with the good yield from Bt cotton in spite of the drought conditions in the last few seasons.

Elsewhere in Africa, farmers have also reported significant reduction in the cost of production through reduced spraying for control of insect pests and diseases. Controlling African bollworm, for example, was costly and the pest caused losses in cotton farming.

This list is expected to keep growing even though in most African countries the cultivation of GMOs has experienced protracted delays through regulatory, political, and social blockades.

Why did Kenya ban GMOs? What has changed?

Kenya banned GM crops in 2012. The ministerial statement on the ban was largely informed by a 2012 scientific report dubbed the Séralini study that associated GMOs with cancer in rats.

Anti-GMO activists have often referred to that report and in addition presented the unknown impact of the modifications as the main reason for pushing for bans. The other issues range from fears about the effect of GMO, the mixed signals from EU about health and safety of GM foods, and the potential risk of GMOs to the environment and biodiversity.

The activists also cite the fear of possible effects of GMOs on non-target organisms and potential development of resistance to insect-pests by the GM crops. Lastly, food safety fears of GMOs remain pertinent in some parts of the continent.

The Kenyan government’s change of stance was underpinned by a number of developments. First of which was the report by a task force on genetically modified foods that resulted in proper scientific regulation and presence of a strong regulatory framework.

Another factor is the lingering drought in which over 4 million Kenyans currently face food insecurity. This may have led the government to consider more radical solutions despite opposition.

The government has decided to review each application for introduction of GMOs on a case-by-case basis.

What could go wrong? And what mitigation plans are there?

There are three main concerns about what could go wrong with GMOs. These are unintended harmful effects, food safety, environmental safety and social attitudes, including fears that GMOs are a case of “man playing God”.

There is also the concern of unintended harmful effects of GMOs on the environment. In anticipation of these risks, scientists working in the field of GMO have created a raft of regulations. These regulations aim to evaluate whether GMOs are just as safe to humans and the environment as their conventional counterparts before they can be accepted for commercialization.

Environmental safety: An international agreement provides a framework for handling, transport and use of GMOs. It provides a clear roadmap for evaluation of the impact of GMOs on the environment. It has instituted the practice of post release monitoring and evaluation for 10 years or more after the release of a GM crop.

The potential development of weeds that can resist one or more specific herbicides – so-called super weeds – is a case in point. Herbicide tolerance has helped farmers to control weeds and significantly reduce the cost of GM crop production. This is because crops can be genetically modified to confer resistance to common herbicides, such as glyphosate.

There is a chance however that farmers can over-rely on this technique of weed control to the detriment of the weeds developing resistance.

The potential for such resistance must be closely monitored. In Kenya, it would fall upon county governments through the extension officers to report any early cases – and to take action – if there are any potential signs of resistance. The aim should be to use multiple approaches to weeds and pest control, also referred to as integrated pest managements systems.

Socio-cultural aspects: The government must make every effort to address people’s concerns about GMOs. This includes pointing out that humans have modified crops for thousands of years. GM foods have now been grown and consumed for over 20 years in different countries.

There is so far no scientific evidence to confirm any of the fears. GM crops have been evaluated to be just as safe for human consumption and to the environment as conventional crops.

Dr Benard Oloo is a Food Safety and Quality Expert, a team Leader, Lecturer of Food Science, Trainer, Life Coach and Author. Mr. Oloo is a Lecturer of Food science and Technology at Egerton University focusing on food safety of different commodity value chains in Kenya. He holds an MSc. Food Science and Technology from Egerton and successfully defended his PhD in March 2021 from the same University awaiting conferment. Previously, he has worked in the Food Industry both as a production supervisor, production manager and quality assurance manager. He is currently in charge of the Guildford Dairy Institute at Egerton University where he is serving as a Food Safety Team Leader implementing ISO 22,000:2005, Food Safety Management System. Mr. Oloo’s research include new product development, value addition, quality and safety. Some of the specific commodities he has worked with include fruits and vegetables, milk and milk products, potatoes, sweet potatoes, meat and meat products safety and quality and indigenous chicken quality and safety. He has earned several international awards including: Borlaug Fellowship (Michigan State University USA 2019), Emerging Leaders Network Award by Institute of Food Technology (IFT), USA 2018, PhD student exchange programme (Durban University of Technology, South Africa) and the African Biosciences Challenge Fund, 2017-2018 at ILRI, Kenya.

Rwanda’s Kagame in Uganda on rare visit as ties warm