Corruption: Two wrongs do not make a right 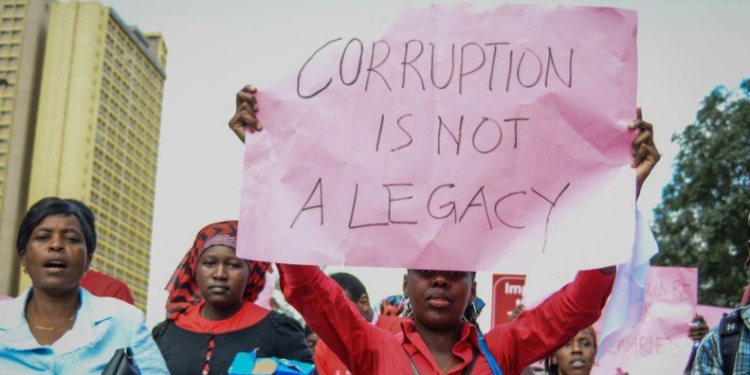 2.3k
SHARES
919
VIEWS
Share on FacebookShare on TwitterShare on WhatsApp

It is a fact that corruption involves individuals who use power granted to them by others for wrongful individual purposes to the exclusion of other people. Such individuals are in privileged positions of authority in public and private relationships, leadership, and commerce, among other sectors.

Corruption takes many forms and any person, regardless of tribe, race, religion, sex, level of education or social standing can be a corrupt person.

On the basis of the amounts, the number of participants and the effect on society, corruption falls into three categories: Petty, Serious and Grand.

Petty corruption involves a quick transaction of small monetary value, the giver, and the taker. This is the most common and widespread of all forms of corruption and because of its size in value and the speed with which it occurs, it is accepted as part of culture but undermines the right morality and the right to good service.

When a traffic officer takes a few coins to overlook a traffic offence, the general public and businesses like insurance are exposed to dangerous drivers.

In Serious corruption, there is usually a number of facilitators or brokers who assist the giver and the taker in executing the transaction like a court prosecutor collecting money from an accused person to bribe the magistrate. When a procurement officer allows a supplier to overcharge for goods and services delivered, the economy operates at a serious loss.

Grand corruption is the worst and most damaging of all forms of corruption as it involves large amounts of money and participants.

One transaction is capable of damaging the entire community, sector, or economy.

In Grand corruption transactions several different departments and players act together in approval and implementation. For instance, officials from the departments of finance, public works, water, and energy come together with contractors, architects, engineers, and banks to facilitate the building of a dam that is not economically viable and at an exorbitant amount of money.

But whichever form corruption may take, it remains an abuse of authority and a threat to society. It manifests itself in many ways such as bribery, extortion, profiteering, nepotism, fraud, favoritism, conflict of interest and general misconduct.

A bribe is something of value like money or property that is meant to influence the action or decision of a person in authority. Bribery occurs before, during or after the action or decision. It is bribery to give a hospital attendant money to be allowed to enter the patient’s ward after visiting hours.

The giver is usually the initiator of the corruption.

Extortion is obtained by force or threats. The taker initiates the corrupt transaction. A threat by a health inspector to shut down a restaurant unless given money is extortion. Even the threat by a teacher to fail a student unless the student accepts the teacher’s amorous advances is extortion.

Profiteering is corruption when a person in authority makes a personal profit from the sale of ‘free of charge’ goods and services. A government doctor who charges for surgery is profiteering and he or she is paid a salary by the public to provide a medical service.

Nepotism occurs when granting favors to one’s relatives. In a job application, one rejects people who are qualified for the appointment in order to benefit a relative who is less qualified.

Corrupt favoritism is when one discriminates in favor of a person or people not closely related to for one’s personal benefit or for the benefit of one’s ethnic community or race. Anyone who influences development projects to his people is engaged in corrupt favoritism.

Fraud is the most widespread and notorious of all manifestations of corruption. It is the use of tricks and lies to obtain a benefit. It is lying about qualifications and experience in order to get a job; presenting false receipts; failure to issue receipts; hoarding of goods and services, among others.

A conflict of interest becomes corruption when the person in authority allows his private interests to override the interests of those, he or she holds trust in. Persons in authority should not be allowed to engage in trade with their employers because they will favor their business interests at the expense of the institutions. Nor should they allow their friends and relatives to do business with these institutions.

Absenteeism from work, recklessness, negligence, general misconduct, and incompetence are forms of corruption where participants earn what they do not deserve.

Givers, takers and facilitators of corruption are aware that their actions are illegal, anti-social and sinful. They therefore create excuses to justify their activities to avoid being held personally responsible for their rotten human character.

Elected leaders and senior government officials use the traditional cultural practice of giving and paying homage as an excuse to engage in corruption.

Those in employment tell us that their income is not sufficient to meet their needs and emergencies. They therefore seek corrupt benefits in order to pay rent, school fees, medical bills, wedding, and funeral expenses, among others.

Sub-standard infrastructure, expired drugs, unsafe buildings, and violent neighborhoods are some of the results of such actions.

Junior officers justify their corrupt behavior on the basis of orders from their powerful seniors. They claim that if they do not obey, they will lose their positions and jobs.

Corrupt people conveniently interpret the traditional duty to be selfless to mean a duty to give people money. So, they go out of their way to engage in every deal available to enable them to fulfil their duty.

In order to escape personal responsibility for their actions, corrupt persons use their communities as the justification to engage in corruption of sharing the “national cake”. Those in business use corruption as a way of fastening the pace and delays in official procedures to prevent their enterprises from collapse.

In closing, as the old saying goes, two wrongs do not make a right. Corruption is a crime committed by the giver, the facilitator, and the taker.