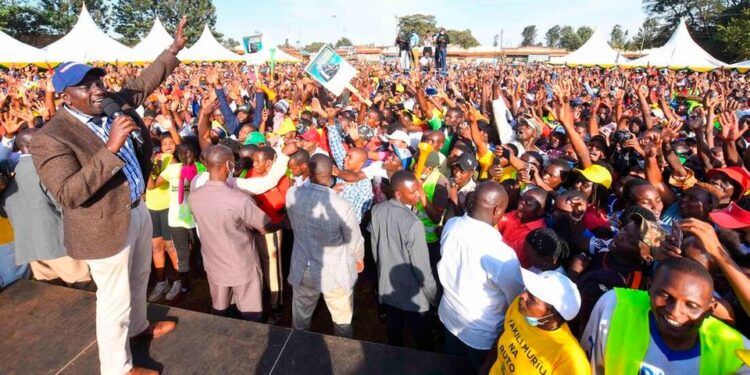 The two chief sponsors of the initiative should be brimming with confidence as the country heads towards a national plebiscite on a raft of key constitutional amendments.

But if anyone thinks that the popular vote will mirror the outcome at the county assemblies, they could be in for a rude shock.

It is easy enough to bribe some 2,000 Members of the County Assembly with goodies pilfered from the public purse but quite a different proposition altogether when you must contend with some 19 million or so registered voters.

In any case, chances are that most of the MCAs who voted in favor of the referendum will not be enthusiastic boosters for the ‘Yes’ camp when it goes to the public campaigns.

They might even turn outright hostile on discovery that the car grants promised to them by the President in exchange for support for the bill were an outright hoax. In this day and age, the President simply does not have an unfettered right to dish out public funds as he wishes.

Too late
President Kenyatta may well have calculated that, by the time the MCAs cotton on to that simple fact, it will be too late for them since the threshold of county assemblies voting for the BBI proposals to go to a referendum will have been reached.

However, a large number of bitter and angry MCAs could seek vengeance for the broken promise by campaigning aggressively for the ‘No’ camp.

President Kenyatta and former Prime Minister Odinga would be making a fatal mistake if they assumed that the referendum is done and dusted.

The stark fact is that there is very little enthusiasm for the referendum. The indifference in their public tours is in stark contrast with the enthusiasm that greets Deputy President William Ruto everywhere he takes his anti-BBI rallies.

What Mr. Kenyatta and Mr. Odinga might have going for them is that, with Dr Ruto finally declining to lead the ‘No’ campaign, the opposition to BBI is badly short of leadership.

Narc-Kenya Party Leader Martha Karua and Mr. Odinga’s former adviser, Dr David Ndii, and the other politicians and civil society operatives fronting the Linda Katiba movement may have the best of intentions but are likely to find themselves outflanked and overrun trying to campaign against a proposal enjoying the full backing of the State machinery.

They might seek comfort in the 2005 referendum, when a ‘No’ camp defeated a proposed new Constitution backed by the Mwai Kibaki government.

The difference, however, is that the ‘No’ campaign then had the full backing of a very powerful and committed political movement fronted by none other than Mr. Odinga and Dr Ruto. It was that campaign which gave birth to Mr. Odinga’s ODM.

If there has ever been in Kenya one politician who revels in consistently confronting the awesome power of the State machine, and holding his own, it is Mr. Odinga.

If there is a politician today who stands as the only one capable of inheriting Mr. Odinga’s mantle, and even stealing his populist rhetoric for the poor and downtrodden, it is Dr Ruto.

However, the Deputy President spurning the open invitation to formally lead the ‘No’ campaign could be quite revealing on how he will act when push comes to shove.

He is most likely to continue the frenetic pace of public rallies and other engagements that are, to all intents and purposes, anti-BBI rallies, while not formally taking up the mantle.

The risk here is that, just as in openly opposing the government from within and rejecting challenges for him to resign, Dr Ruto could be reinforcing perceptions that he wants to have his cake and eat it.

Should the BBI referendum sail through, the DP can say that it was because he did not oppose it. And even if it is defeated, he will claim credit for the outcome.

Running unopposed
Already, similar narratives are evident from Dr Ruto’s political and social media wind vanes on the back of the county assembly massacre.

The message going out is that the Uhuru-Raila camp has no victory worth crowing about because they were running unopposed.

The fact, however, is that in the run up to the county assembly vote, Dr Ruto’s acolytes were thumping their chests in advance for what they were loudly predicting would be a resounding ‘Nyet’ from across the country.

Perhaps, Dr Ruto badly needs to examine the quality and sincerity of those around him, and also take a hard look at his inner self and assess whether he is, indeed, ready to take the plunge.

David Ndii is Managing Director of Africa Economics. He served as a technical advisor on Public Finance to the Committee of Experts.

Clifford Machoka Says Presidential Debate Will Be Held On July 26