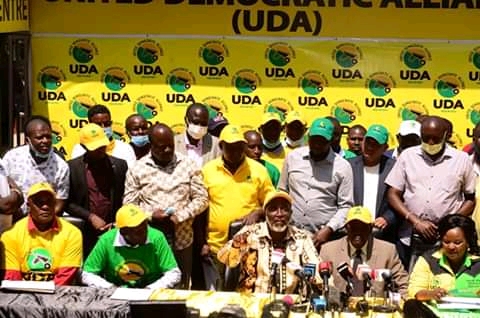 Police on Thursday disrupted a meeting of the United Democratic Alliance (UDA) convened at a hotel in Mombasa.

According to Nyali Sub-county police commander Daniel Masaba, they had not been informed of the meeting held at Terrace Villas Resort and attended by among others UDA Chairman Johnson Muthama and Secretary General Veronica Maina.

“No gathering of people like this is allowed, especially political meeting,” said the police commander, reiterating that political gatherings have been suspended as part of COVID-19 containment measures.

The mobilization meeting had brought together aspirants and supporters of UDA from Coast region counties including; Lamu, Taita Taveta, Kilifi, Kwale, Tana River and Mombasa.

Muthama, who was leading the meeting, was forced to flee after police officers reported to be acting on a tip off arrived at the venue.

Drama was also witnessed as those who attended the meeting insisted on being allowed to either eat or pack and leave with the food that had been set aside for the function.

Ruto’s Mother Thanks Kenyans for Their support, Says God Answered Their Prayers