Study Discovers “the Oldest Known Sentence Written in an Alphabet”

The inscription is the first alphabet-based language, making it a landmark discovery in the history of the human ability to write. 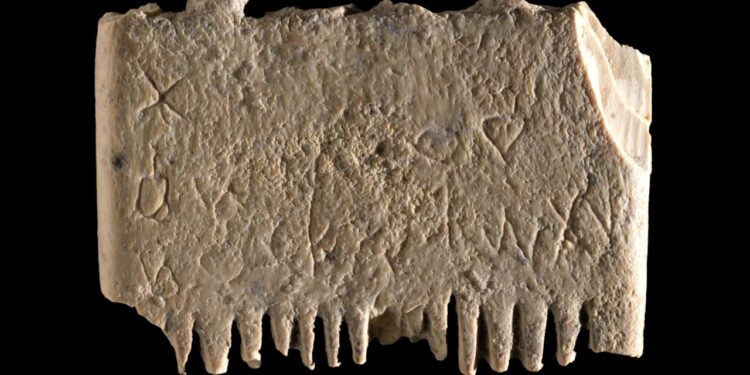 The ivory comb featuring an inscription: "May this tusk root out the lice of the hair and the beard." Photo: Courtesy

A new study has established that a seven-word inscription discovered by accident on a 3,700-year-old lice comb is “the oldest known sentence written in an alphabet.”

The Canaanite words, “May this tusk root out the lice of the hair and the beard,” are inscribed on an ivory comb.

According to Yosef Garfinkel, a professor of archaeology at the Hebrew University of Jerusalem, and a coauthor of the study that was published in the Jerusalem Journal of Archaeology, the inscription is the first alphabet-based language, “making it a landmark discovery in the history of the human ability to write.”

“Nothing like this was found before. It’s not the royal inscription of a king … this is something very human. You’re immediately connected to this person who had this comb,” he said.

“The very earliest writing system originated around 5,000 years ago and was used by ancient Sumerians of Mesopotamia (in what’s now Iraq). Like Egyptian hieroglyphics, the system, known as cuneiform in its later stages, relied on hundreds of pictograms to represent words, ideas and sounds,” Katie Hunt reports.

Garfinkel added that “Canaanites were the first to use letters that represented sounds in their writing system, which subsequently evolved into the Phoenician, Greek and ultimately the Latin alphabet that’s most commonly used today.”

“The Canaanites invented the alphabet. … Nowadays every person in the world can read and write using the alphabet system. This is really one of the most important intellectual achievements of humankind,” he said.

According to Hunt, the comb was unearthed in 2016 at an Israeli archaeological site called Lachish, a Canaanite city state in the second millennium BC. However, “it wasn’t until 2021 when Madeleine Mumcuoglu, a research associate at the Hebrew University of Jerusalem, first noticed the engraving when she zoomed in on an iPhone snapshot of the comb after completing her study of the lice remains found on the artifact.”