by Carolyne Rabut
in Athletics, Sports
0 0
0 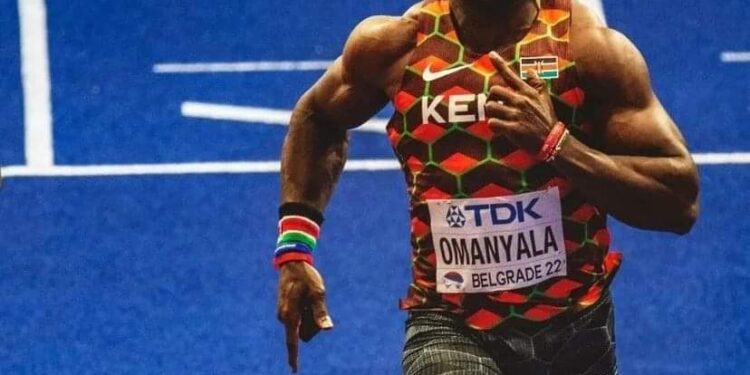 Africa’s fastest man Ferdinand Omanyala of Kenya is aiming for a sub-10 finish during the 4th leg of the ASA Athletics Grand Prix Series, also a Continental Tour Challenger event, at the Germiston Athletics Stadium in Johannesburg on Wednesday night.

Omanyala stopped the clock at 10.11 seconds to win the 100m during the 3rd leg of the ASA Athletics Grand Prix Series at the NWU McArthur Athletics Stadium in Potchefstroom last Wednesday.

Omanyala and Akani Simbine – the South African 100m record holder (9.84 personal best), will headline the night’s programme, but the 26-year-old East African sprint ace, who set the African record in Nairobi in 2021, is more worried about running a faster time than beating Simbine in the sprint battle.

He is however, looking forward to his duel with the African champion for that motivation.

“I hope it will not rain in Germiston so that we can give the fans value for their money,” said Omanyala, who was training under a steady downpour on Monday at the Ruimsig Athletics Stadium in Johannesburg as part of his build up to the Wednesday super clash.

“I’m not focusing too much on Akani, but I want to race against the clock and run a faster time. We have to push each other to run a fast time. I am going head-to-head against the former African record holder. I am excited and want to put on a great show for the supporters. My goal is to run 9.96 or 9.95 depending on the weather on the day,” said Omanyala.

Omanyala is using the ASA Athletics Grand Prix Series as part of his preparations for the CAA African Senior Track and Field Championships (Mauritius) and the Commonwealth Games (Birmingham, England) where he wants to wrestle Simbine’s respective 100m titles. He also wants to secure a podium finish at the World Championships in Oregon, USA in August.

He then went on to shower Athletics South Africa for organizing what he termed a quality competition that allows the athletes to run against some of the best names on the continent.

“The Grand Prix was well organized and I wished the Potch leg took place during the day because it then became cold at night. I love the organization and am happy that it was also live on television.”

“Other African countries can learn a lot from South Africa. They are giving athletes that cannot get out of the country and continent an opportunity to compete. African athletes lack competition, but in South Africa it is a different story. The organization is top class.”

CJ Koome: I Do Not Support Corporal Punishment

Ledama Ole Kina Accused Of Being The Mole In Azimio Team