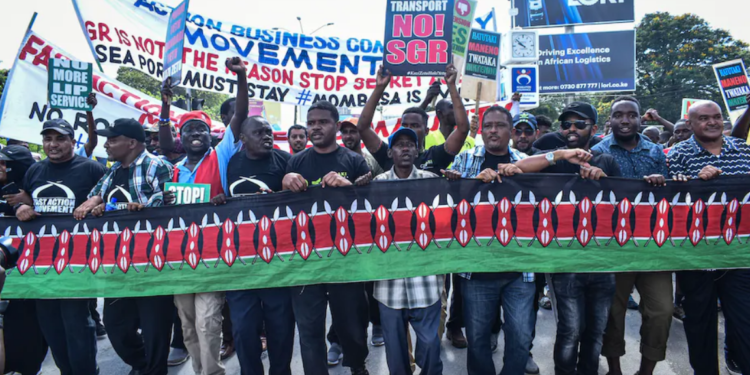 People’s responses to large infrastructure projects – railways, bridges, highways – are rarely neutral. To some, these projects represent powerful social and political promises of transformative change and a brighter future. To others, they mean evictions and the disruption of livelihoods.

The reaction of Kenyans to the country’s Standard Gauge Railway, dubbed the Madaraka Express, is no different.

In 2017, Kenya finished the railway’s first phase, which connects the Port of Mombasa to the country’s interior. Its second phase stops abruptly in Naivasha, a town 120km northwest of the capital, Nairobi.

Ultimately, the railway is planned to reach Kenya’s border with Uganda at Malaba, helping to further connect East Africa’s regional transport and trade.

Alongside other large projects, such as a transport corridor from the Lamu Port to South Sudan and Ethiopia, the Standard Gauge Railway is central to Kenya’s current national development policy, Vision 2030.

The policy frames these mega-projects as key to attracting the private sector interest needed to fuel economic growth, increase exports and alleviate poverty. From this perspective, the new railway is a powerful symbol of development, change and national pride.

But there’s a flip side. In my earlier research on the impact of the railway project, I looked at evictions, displacement and the interruption of livelihoods. In my new study, I set out to examine how people cope with these disruptions in their lives.

The resounding response? This mega-project has failed to bring the promised positive changes. My latest research builds on my earlier work, which showed that the project increased socio-economic inequalities across Kenya. I demonstrated that mega-projects tend to represent only the interests of state and business elites.

In this study, I further explore how those most disadvantaged experience the changes brought by mega-projects.

I undertook more than five months of fieldwork during several periods between November 2018 and January 2020 in different urban, peri-urban and rural locations between Mombasa and Narok in the south-west of the country. I interviewed more than 200 people to better understand whether and how the new railway had affected their lives.

Makueni County is located in the south-eastern part of Kenya. Some of the county’s small villages, such as Kima, home to over 400 people, were cut into two when the railway was built.

An embankment and fence runs right through what was once a single village.

Previously, residents could visit their neighbors and relatives in less than 15 minutes. Today, it takes one hour to reach the closest underpass that connects Kima.

As a group of men in the village told me:

(The government is) imagining that they are creating development for the people, but this is not the case, this railway brings serious problems (here) – the road to development is paved on the pain and suffering of poor people like us.

According to community leaders, this disruption of local mobility patterns occurred due to a blatant disregard for their lives from both the national government and the project contractor, China Road and Bridge Corporation.

In other parts of Kenya, similar views were expressed by several community liaison officers. They were contracted by Kenya Railways to mediate community relations before and during the railway’s construction. These officers explained how the railway design was developed without prior community consultation and, therefore, ignored existing mobility routes.

The Standard Gauge Railway has in fact disrupted livelihoods that depend on local transport systems.

This particularly includes the Nairobi-Mombasa Road A109, infamous for traffic congestion caused by long-distance trucks transporting cargo to and from the Mombasa Port to inland destinations in Kenya and beyond.

In Taita Taveta, for instance, over a range of 47 kilometres of the A109 between Voi and Miaseni, local livelihoods fundamentally depend on traffic movement. Alongside this road, there are convenience shops, eateries, guesthouses and brothels.

Outside these facilities, young men wash cars or provide mechanical services for passing truckers. For a small fee of a few hundred Kenyan shillings, older men watch these trucks overnight when drivers stop to rest. Women provide laundry and other services.

Although trucks congest the road, resulting in air and noise pollution, a busy road means economic activity for those in nearby communities.

This reality, however, was ignored by the Kenyan government. In 2018, it passed a national decree obliging all containerized cargo entering the Mombasa port to be transported on the Standard Gauge Railway. According to the Kenya Transporters Association, this led to about 12,000 trucks carrying container cargo being put out of business. As a result, a similar number of drivers and truck loaders lost their jobs.

At the time of my research, this had noticeable effects. Alongside the A109 road, guesthouses accommodating long-distance drivers were empty on most days, car washing spots had closed down and drinking houses were mostly frequented by local men. Residents of these areas had been economically dependent on the long-distance truck industry for 30 years. They expressed their discontentment and despair. As one shop owner noted:

This SGR, it has taken our lives from us, it has left us here with no customers, no movement, no nothing. People are very poor here, so they don’t buy the things I sell here. I need movement to survive.

The railway project’s impact on livelihoods was turned into a campaign issue ahead of Kenya’s August 2022 elections. A month after being voted in, President William Ruto made good his campaign promise and lifted the order on mandatory use of the railway for containerized cargo. Different groups, including transporters and Mombasa port stakeholders, have praised this move as likely to revive the coastal economy and restore lost jobs.

As demonstrated in other contexts, the key to avoiding mega-projects having a dramatic effect on vulnerable groups is to rigorously assess the social and environmental impacts before, during and after project construction.

These legal mechanisms exist in Kenya. But there’s not enough political will to use them.

Unless local people’s needs and livelihoods are taken into account when mega infrastructure is planned and implemented, these projects are unlikely to bring the promised development.

Gediminas Lesutis is a Marie Curie Fellow at University of Amsterdam, the Netherlands. His research is in the areas of political geography and global political economy, particularly in regard to everyday life, subjectivity, extractivism, mega-infrastructures, bio- and necro-political power, and the politics of development across South and East Africa. Gediminas has published peer-reviewed research articles in African Affairs, Geoforum, Political Geography, Urban Geography, Transactions of the Institute of British Geographers, Annals of the American Association of Geographers, Environment and Planning D: Society and Space, and others. His first monograph, The Politics of Precarity: Spaces of Extactivisim, Violence, and Suffering, was published with Routledge Interventions in 2022. Before joining University of Amsterdam, Gediminas was a Research Associate at University of Cambridge and a Research Fellow at Darwin College, the United Kingdom.