by Carol Mwanzia
in Health, News
0 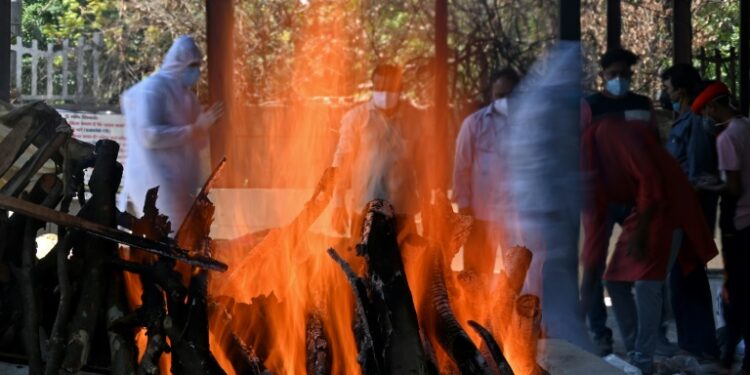 The Covid-19 death toll in India has crossed 300,000, as the country fights one of the worst outbreaks in the world | AFP

India’s Covid-19 death toll topped 300,000 on Monday as it tried to contain its huge outbreak, while Japan opened its first mass vaccination centers just two months before the start of the Olympics.

Deadly outbreaks in India, Brazil and elsewhere have pushed global coronavirus fatalities past 3.4 million, even as many wealthy countries such as the United States, Britain and Israel have eased restrictions.

The number of new daily infections has fallen in India’s big cities, but cases and deaths have been breaking records in recent weeks with shortages of hospital beds, oxygen and critical drugs.

“The first wave taught us about the virus, what to do, how to be, and we even got vaccinations,” Sheela, relative of a Covid patient, told AFP outside a hospital in the southern city of Chennai.

“But … this situation is scarier.”

Many experts also believe India’s real toll is much higher, particularly as the disease spreads into rural areas where the majority of the 1.3 billion population lives and where health facilities and record-keeping are poor.

India has administered close to two hundred million shots, but experts say the programme needs to be ramped up significantly to effectively fight the virus.

Another Asian country that has faced criticism over a slow inoculation rate is Japan, where the first mass vaccination centers opened on Monday.

“It’s wonderful. I can rest easy now. For a long time, a year, and a half, I was feeling rather anxious and tense,” Hideo Ishikawa, 73, told reporters after he got the shot.

Japanese authorities are trying to speed up their vaccination drive with just two months before until postponed Tokyo Olympics begin.

Just two percent of Japan’s 125 million population has been fully vaccinated, compared with around 40 percent in the United States and 15 percent in France.

US cases, deaths drop
More than 130 million people in the United States have been fully vaccinated, and restrictions are being steadily eased in many parts of the country that has the highest number of known deaths and cases in the world.

The seven-day average of new US cases has dropped to a level not seen since June last year, Rochelle Walensky of the Centers for Disease Control said during a briefing on Friday.

Thanks to this progress, New Yorkers can now enjoy many of the activities that had become unthinkable for more than a year in a city that was once the epicenter of the deadly US Covid-19 outbreak.

But some remain cautious despite the easing.

At an outdoor party in the city’s famous Central Park, many guests said they did not want to invite people into their homes yet — except for very close friends who they would be sure have been vaccinated.

“I don’t know if we’ll ever go back to complete comfort with that … not in the immediate future,” said Merry Mathes, 58.

The health ministry of Israel, another nation with a highly successful vaccination rollout, said it had proposed the lifting of all virus restrictions inside its territory from June 1.

But it will keep in place restrictions on travelers coming to the country.

Dogs sniff for Covid-19
In sharp contrast, the rollout remains painfully slow in Brazil, one of the hardest-hit countries in the world.

Its far-right president Jair Bolsonaro has been widely condemned for his coronavirus skepticism and pandemic management, with Brazil’s death toll crossing 450,000.

But he has remained defiant, leading a motorbike rally through Rio de Janeiro on Sunday as throngs gathered to cheer him on despite the coronavirus risk.

In Saudi Arabia, authorities have tightened the screws on coronavirus vaccine sceptics, barring them from pilgrimages and overseas travel.

Such people will also be blocked from universities, malls, and offices.

And humans might have an ally in the fight against the virus: dogs.

According to research published Monday, dogs — with their remarkable sense of smell — can be trained to detect more than 90 percent of Covid-19 infections even when patients are asymptomatic.

Authors of the research, which is yet to be peer-reviewed, said they hoped it could eventually replace the need to quarantine travelers.

Ethiopia's Election scheduled for June 21: Five things to know about the election

Huddah Monroe Attracts Hate After Claiming Some Holidays Should Be Disbanded

Ruto Says He will Respect Uhuru As The Outgoing President