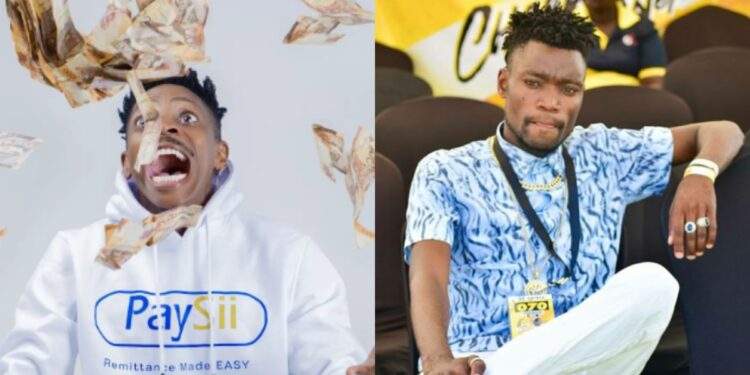 Kenyan comedian Eric Omondi has come out guns blazing after being implicated in an alleged con game.

Eric Omondi recently sent out a warning to a Kisumu-based musician named Screenshot DNC and even threatened to arrest him for trying to ruin his reputation.

The comedian disclosed that the musician not only soiled his name but also used part of his works on his own music video without his prior permission.

The whole tiff was triggered by Screenshot DNC who had come out to expose Eric Omondi as a con.

According to the musician who sings in Dholuo, he allegedly paid Eric Omondi KSh 30,000 to appear in his music video Yesu Okumbana, and subsequently promote it online through his social media pages.

The musician insisted that Eric Omondi only appeared in the video and had refused to promote it on other platforms.

Screenshot DNC’s plight was highlighted by The Truth Watchdog through his YouTube channel, The Kenya Times understands.

In trying to find out the truth about the whole case, The Truth Watchdog reached out to Eric Omondi who vehemently distanced himself from the musician.

Eric disclosed he does not know the musician, has never appeared in the said music video, and has no idea why Screenshot DNC wanted to ride on his name for clout.

The comedian in fact revealed Screenshot DNC stole part of an advertisement he did with Sportpesa and included it in his video; a move he termed illegal.

Eric Omondi threatened to take legal action against Screenshot DNC for stealing Sportpesa content and dragging his name in the mud.

He gave the musician less than three minutes to delete his music video from YouTube or face dire consequences.

”Those boys are stupid. They cut a portion of that video from a Sportpesa Ad. In fact, they will get arrested. Tell them to pull down the video from YouTube as fast as possible. I am giving them three minutes. I will take them to the cell. They should ask that guy who tried to mess with Mungai Eve, he is in a cell now. I want them to call me and apologise and delete that video,”Eric Omondi said.

The comedian wrapped up by noting that Screenshot DNC should have reached out to him and asked for help instead of trying to chase clout using his works and name without his permission.

During My Time, No Bank Collapsed – CS Nominee Ndung’u