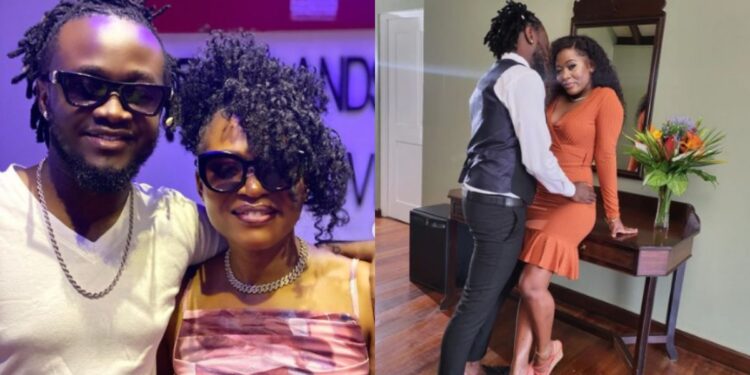 Bahati and Sosuun were caught on camera holding each other seductively. Photo: Bahati/Instagram.

Former gospel singer Bahati has left tongues wagging after sharing a photo of himself with fellow musician Sosuun in a very compromising position.

The photo, which was posted both on Bahati and Sosuun’s Instagram pages irked quite a number of Kenyans on social media who felt it was wrong for two married people to behave in such a manner.

In the photo, Bahati could be seen holding Sosuun’s waist seductively and leaning forward for a possible smooch.

The Kenya Times understands Bahati, on Thursday, November 10, released the Mambo ya Mhesh remix video in which he featured Sosuun, Sylvia Ssaru, and his wife Diana Marua.

The music video received a warm reception and that pushed Bahati to promote it even further by posting behind-the-scenes photos from the video shoot.

Well, while the photo pleased a handful of Bahati and Sosuun’s fans, quite a multitude condemned the two for pulling the move.

Most critics who camped on the comments section of Bahati”s post slammed the two artists and wondered what message they were trying to pass with the photo.

Many insisted Bahati, a married man should respect his wife Diana Marua, and not touch other people’s wives inappropriately, in this case, Sosuun.

Also Read: Terence Creative Says He Had No Problem His Wife Gyrating on Bahati’s Nether Region

The comments section of Bahati’s post was filled with criticism with many people fearing for Diana Marua who gave birth barely a week ago.

Many noted that the musicians may be trying to chase clout to promote their new song but felt they had crossed the line with this one.

Chebby was seen gyrating on Bahati’s crotch, something that angered many considering the fact that both are married to different people.

Feeding Bottles Have Not Been Banned, Ministry of Health Says