by Jackson Okata
in Crime, Terrorism
0 0
0 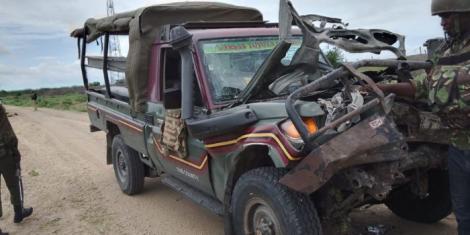 Five police officers sustained gunshot wounds after a vehicle they were traveling in was sprayed with bullets by suspected Al Shabaab militants.

According to a police report the police officers were ambushed along the Wargadud – Elwak road by armed gunmen who were on foot.

Police suspect the ambush was conducted by Al Shabaab militants who had been spotted by residents in the area earlier on.

The vehicle was ferrying a multi-agency team of officers from the Directorate of Criminal Investigations (DCI), the Nation Police Service, and the Critical Infrastructure and Border Patrol units.

The officers were rushed to the Elwak Sub County Hospital for treatment.

KDF and GSU officers  were deployed to beef up security in the area.

“We have increased external threats in areas along our border with Somalia. All security arrangements are in place to ensure the coming elections are not interfered with,” Mandera County Commissioner, Onesmus Kyatha, stated.

Somalia’s next peacekeeping mission: will it change anything?