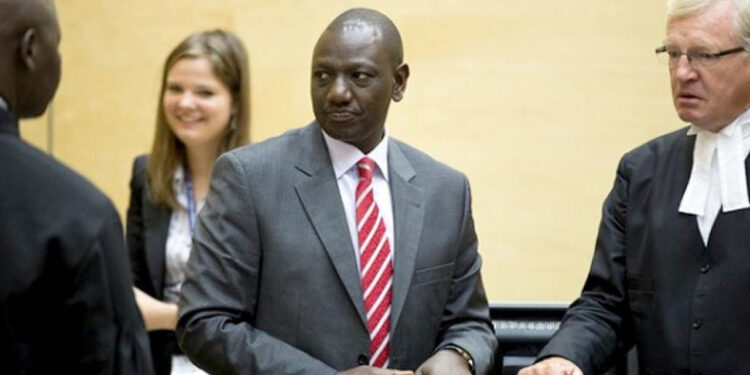 Kenya's Deputy President William Ruto at the International Criminal Court in The Hague. Judges have ordered proceedings to continue in private after details of protected witness were revealed online | Photo: ICC-CPI/Flickr

The criminal trial of a Kenyan lawyer accused of bribing witnesses began before the International Criminal Court on Tuesday.

Paul Gicheru is facing 16 counts of witness tampering and bribery for interfering with witnesses against William Ruto, Kenya’s vice president whom the court charged with crimes against humanity for stoking post-election violence in 2007.

The 49-year-old wore a three-piece blue suit and a blue surgical face mask as he quietly sat in the courtroom in The Hague while prosecutors began their presentations against him.

“He was essential in directing and coordinating the plan,” prosecution lawyer Alice Zago told the court. The hearing was held in a hybrid session.

After Kenya lost an estimated 1,000 lives and more than half a million people were displaced through post-election violence in 2010, the ICC saw cases against seven suspects, including current Kenyan President Uhuru Kenyatta, collapse in part because of witness tampering.

Gicheru has denied the charges against him.

He surrendered to Dutch authorities in 2020, five years after the first arrest warrant was issued by the court, though it’s unclear why he chose to surrender.

His co-counsel in the Ruto case, Philip Kipkoech Bett, has also been charged but remains at large.

He has recused himself from the Kenya investigation entirely, turning the Gicheru case over to his deputy prosecutor, James Stewart.

Connected to the courtroom via video link, the prosecution’s first witness testified that they had a series of phone calls and in-person meetings with Gicheru, who encouraged them to recant their testimony against Ruto in exchange for money.

The witness’s identity was obscured, including through voice-manipulation software. According to prosecutors, the pair allegedly offered eight prosecution witnesses between $5,000 and $50,000 to withdraw from the case.

The witness-tampering case itself has also been hindered by problems with witnesses.

Earlier this month, the court announced that a key witness in the case, who had previously indicated they were willing to testify, had broken off contact with investigators.

The court request assisted from Kenya to compel the witness, who allegedly was involved in delivering bribery payments, to appear.

Hearings will continue for the rest of the month.