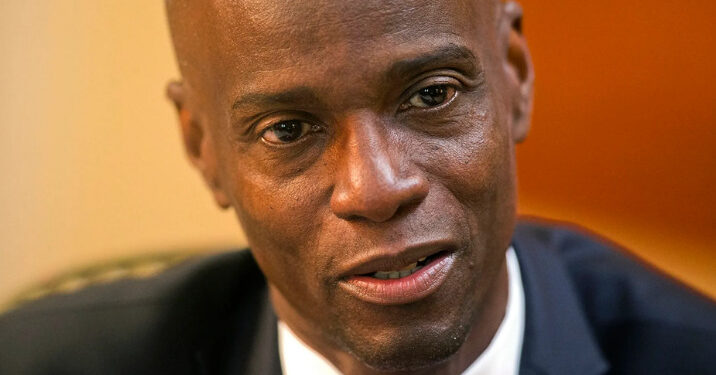 At around 1am on Wednesday July 7, a group of unidentified people, including some speaking Spanish, attacked the private residence of the president, mortally wounding the head of state. The First Lady suffered bullet injuries and was in hospital, said a statement released by Joseph’s office.

Joseph said he was now in charge of the country.

Condemning the “inhumane and barbaric act”, Joseph called for calm, saying the police and the country’s armed forces had taken control of the security situation.

The gunmen identified themselves as agents from the US Drug Enforcement Administration (DEA), the Haitian ambassador to the United States told Reuters, citing government video footage, but added he did not believe that was the case.

“No way they were DEA agents,”

“No way they were DEA agents,” Ambassador Bochhit Edmond told Reuters in an interview.

The United States is standing ready to provide any assistance Haiti might need after the assassination of its president, the US State Department said on Wednesday.

Speaking at a regular news conference, department spokesman Ned Price said the United States urged Haitian authorities to bring those responsible to justice and said reports that the attackers were US Drug Enforcement Administration agents were “absolutely false”.

‘Immediate closure’ of border with Dominican Republic
With Haiti politically divided and facing a growing humanitarian crisis and shortages of food, there are fears of widespread disorder.

The government of the Dominican Republic on Wednesday ordered the “immediate closure” of its border with Haiti after the assassination.

Moise had been ruling Haiti, the poorest country in the Americas, by decree, after legislative elections due in 2018 were delayed in the wake of disputes, including on when his own term ends.

In addition to the political crisis, kidnappings for ransom have surged in recent months, further reflecting the growing influence of armed gangs in the Caribbean nation.

US assessing ‘tragic attack’
Hours after the shock news of the assassination broke, the US said it was assessing the “tragic attack” in Haiti.

The US Embassy said in a statement it would be closed on Wednesday due to the “ongoing security situation”.

Biden said Wednesday he was “shocked” by the assassination of Haiti’s president and that “a lot” more information is needed.

“We are shocked and saddened to hear of the horrific assassination of President Jovenel Moise and the attack on First Lady Martine Moise,” Biden said in a statement.

“We condemn this heinous act, and I am sending my sincere wishes for First Lady Moise’s recovery,” he added.

Speaking to reporters as he left for a trip to Chicago, Biden called the incident “very worrisome” and said “we need a lot more information”.

France on Wednesday also condemned the “cowardly assassination” of Haiti’s president, urging restraint and calm in the Caribbean nation in the wake of his killing.

“All light must be shed on this crime, which takes place in a political and security climate that has severely worsened,” said France’s Foreign Minister Jean-Yves Le Drian. “I urge all those in Haitian politics to act with calm and restraint.”

British Prime Minister Boris Johnson on Wednesday expressed his shock on Twitter as news of the assassination spread, describing it as an “abhorrent act”.

I am shocked and saddened at the death of President Moïse. Our condolences are with his family and the people of Haiti. This is an abhorrent act and I call for calm at this time.

Colombian President Ivan Duque called on the Organization of American States to send an urgent mission to Haiti to protect democracy. “We reject the vile assassination of the Haitian President Jovenel Moise. It is a cowardly act full of barbarity against the entire Haitian people,” he said.

Insecurity and political instability
The president faced steep opposition from swathes of the population that deemed his mandate illegitimate, and he churned through a series of seven prime ministers in four years. Joseph was slated to be replaced this week after only three months in the post.

In addition to presidential, legislative, and local elections, Haiti was due to have a constitutional referendum in September after it was twice postponed due to the coronavirus pandemic.

Supported by Moise, the text of the constitutional reform, aimed at strengthening the executive branch, has been overwhelmingly rejected by the opposition and many civil society organizations.

The constitution currently in force was written in 1987 after the fall of the Duvalier dictatorship and declares that “any popular consultation aimed at modifying the Constitution by referendum is formally prohibited.”

Critics had also claimed it was impossible to organize a poll, given the general insecurity in the country.