33,984 KCPE Candidates Did Not Make Any Secondary School Selection

From Tuesday, learners will be able to access the portal to check the schools they have been assigned to 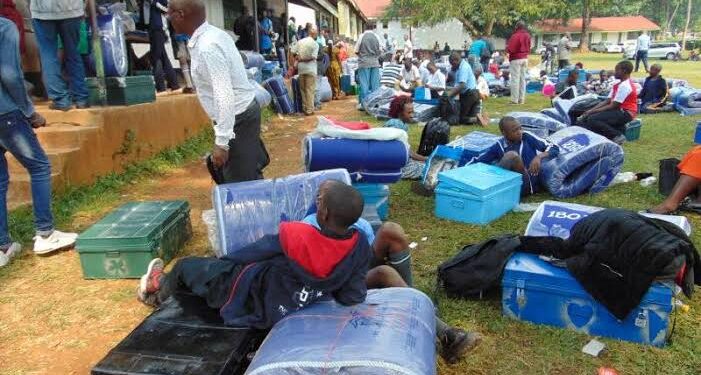 Form One students wait for admission at a school.Photo/Courtesy

The Ministry of Education has announced that a total of 33,984 candidates who sat the 2022 Kenya Certificate of Primary Education (KCPE) examinations did not make any selection of a secondary school they would wish to join.

The candidates were from some 2673 schools from across the country.

Speaking on Monday when he released the Form One selection and placement results for the 2022 KCPE candidates, Education Cabinet Secretary Ezekiel Machogu blamed school heads for the anomaly.

Machogu directed County Directors of Education to investigate schools whose candidates failed to make selections and take action on the school heads.

The CS however said the candidates who did not make selections have been placed in different schools.

“However the Ministry has placed them in schools,”said Machogu.

At the same time, the Ministry has announced that no secondary schools will be allowed to admit Form One students beyond their capacity.

CS Machogu called on candidates who missed their schools of choice to accept schools they have been placed in.

The Education Ministry says many candidates will miss the schools they had selected.

Additionally, CS Machogu announced top schools that received the highest number of selections against their capacity.

Further, CS Machogu announced that Form One reporting dates will run from 6-13 February 2023.

Green Future is Cause for Worry in S.Africa’s Coal Belt