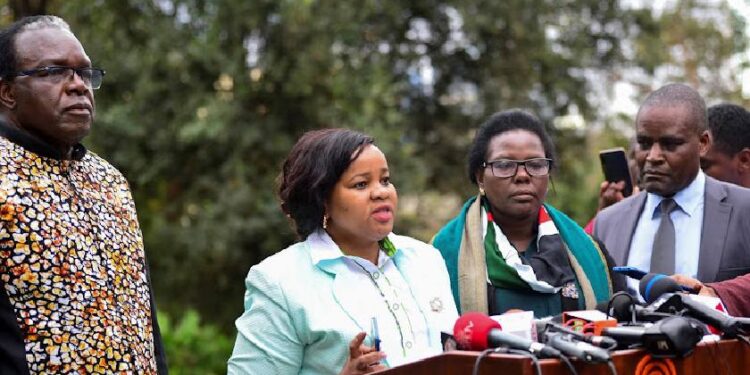 The Departmental Committee on Justice and Legal Affairs is set to begin public hearings on petitions seeking to remove four Independent Electoral and Boundaries Commission (IEBC) Commissioners from office.

The public hearings will be conducted as from Thursday November 24, 2022

Moreover, the petitions are seeking for the removal from office of Juliana Cherera; Irene Masit; Justus Nyang’aya and Francis Wanderi as Commissioners of the IEBC.

The petitioners cited several reasons to have the officials removed from office: including serious violation of the Constitution and other laws, gross misconduct, and incompetence.

The committee will first hear a petition by the Republican Liberty on November 24 then proceed to conduct a cross-examination of the said Party.

In addition, hearing of a petition by Rev. Dennis Ndwiga Nthumbi and his cross-examination will follow suit. The petitions by Geoffrey Langat and Steve Owuor will be heard on Friday, November 25, followed by their cross-examination.

Also Read: 4 Commissioners Had no Proof of Result Manipulation-Supreme Court

Nevertheless, responses and cross-examination of Juliana Cherera and Irene Masit will be conducted on Monday, November 28, while that of Francis Wanderi and Justus Nyang’aya is scheduled for Tuesday, November 29.

Moreover, the first petition presented by the Republican Party seeks the removal of the four on the grounds of violation of the constitution. According to the petitioner, the four officials “failed to promote public confidence in the office that they hold and brought dishonor to the nation and lack of dignity to the office contrary to article 73 (1) (a).”

Likewise, the second petition presented by Dennis Nthumbi seeks the removal of office of the four on grounds of serious violation of the constitution and the law, gross misconduct, and incompetence.

The petitioner argues that the commissioners demonstrated partiality and biased conduct in agreeing to a proposal to alter election results to subvert the will of the people of Kenya contrary to article 10 (73) (b) of the constitution, Sections 9, 26 & 30 of the IEBC Act.

Additionally, the third and fourth petitions presented by Geoffrey Lagat and Owuor Steve Jerry also seek removal from office of the four commissioners over gross misconduct and violation of the constitution.

Raila Pans off Claims of Uhuru’s Betrayal on BBI