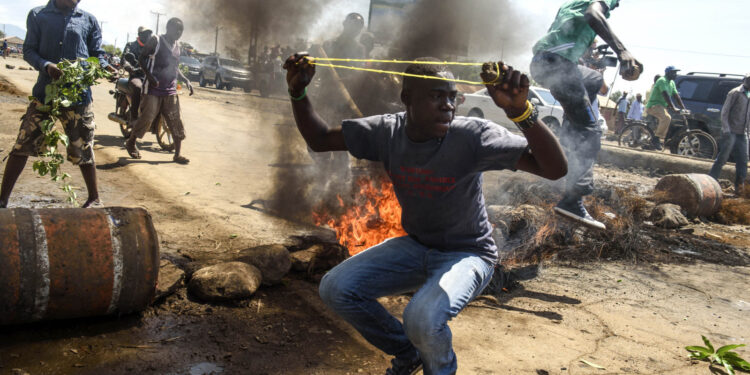 Quite often we like to tell the grieving constituency amongst us to “accept and move on” without interrogating the legitimacy of their protestation. By doing so we are basically legitimising impunity.

Impunity is the exemption from reparation for which a wrong has been occasioned. It can be normalised, the way Kenya has done it, such that wrongs become rights and injustice become justice and vice become virtue. For instance, Kenya’s independent institutions – a term frequently wrongly used – are no longer independent. That is if they have demonstrated the reason to be described as such at any one point.

The judiciary, electoral agency, office of the Director of Public Prosecution, Director of Criminal Investigation and, most disturbingly, the media, have extremely been mobilized into state stooges to advance interests of those in power, in the end perpetuating impunity. In 2019, the High court in Nairobi ordered anti-corruption tsar John Githongo to pay Sh27 million to former Internal Security minister Chris Murungaru for alleged defamation in the Anglo leasing scandal. Kenyan media packaged the story in a way that it came out as a loss to Githongo. Yet, in truth, it’s the tax payers who lost.

Post colony has never fully achieved its own political legitimacy or established self-sufficiency after the movement of decolonization. Most post colonies constitute a regime that repeats and exacerbates and further colonial situation by ruling according to unmediated violence, a politics of terror, torture and the right to kill, rather than popular consent or through the exercise of the law, Cameroonian academic Achile Mbembe wrote in 2001.

Kenya was among the first African countries to sign the Malabo protocol that seeks to entrench jurisdiction of African Court on Human and Peoples Rights (ACHPR). The Malabo protocol grants immunity to heads of state and senior persons in government from court’s investigation and prosecution – a striking converse of the International Criminal Court principles. It means, if ratified, as long as the indicted individuals remain in senior positions in government, which is not pretty difficult in fledgling democracies, they remain immune from court proceedings.

It also means this immunity accords them the position to determine the fate of the case(s) for which they have been charged thus escaping retribution for their wrongs.

There could be no better time to speak about Kenya’s brazen state impunity than today when so many deaths remain unsolved and corruption cases are determined by the politics of the day. Characters that are politically correct, depending on the politics that dictate the day, are acquitted unilaterally at the expense of justice.

Also Read: Decolonizing Ethnic Solidarity: Why Kenyans Must Free Themselves from Traditional Authority of Tribal Kingpins

Kenya has established for herself a type of culture that endorses extremism as opposed to dialogical approach in seeking solutions to her problems. Elections are carried out without pretence of fairness where the loser becomes the winner and the winner is budged into submission.

High profile people have died few days to elections in a classical “How Not to Lose Elections” conspiracy. Former Independent Electoral and Boundaries Commission (IEBC) ICT manager Chris Chege Msando was eliminated in the most horrendous way imaginable. Others include former Cabinet Secretary Joseph Nkaissery who died in suspicious circumstances in the run up to August 2017 elections. It has widely been claimed that the “deep state” had a hand in the death of Cabinet Minister Prof George Saitoti and his deputy Orwa Ojode. Saitoti and Ojode died in an aircraft accident in June 2012.

“Could they not have shaken hands before the election; made peace and spared your life and those of others… one thing I know for sure is that my tears will not roll down my cheeks in vain. Those behind your brutal torture and murder shall not find peace”, reads a letter from Eva Buyu Msando to her slain husband published by The Elephant in 2019.

As wine and water are to Christians, impunity is to the high and mighty of Kenya’s polity. President Daniel arap Moi ruled Kenya like his father’s chicken coop. He made Kenya an indefinably oppressive society and presided over a corrupt regime that brought Kenya to near economic collapse. During his 24 years of tyrannical rule, Kenya emerged as the most rigidly controlled totalitarian state south of the Gulf, after Yoweri Museveni’s Uganda. Moi clothed himself into a benevolent dictator, a lather-day saint Bhakita, a bible-thumbing church-goer president as he oversaw massive plunder of state resources and horrendous human rights abuse.

Yet when Moi died, people who ate with him and assisted him in stealing Kenya’s future made him more human being than those who mysteriously died or disappeared under his government. The media joined this cabal in drafting a romantic hagiography in a language that undermined integrity of our historicity by immortalizing a man who had already left a permanent mark of misrule, corruption and ethic hassle in the national memory.

Kenya cannot have a darker shadow cast over the nexus of her heritage. “We know judgement is not for us. That job is for the authority of the world below. We can only ask that justice be done even in death,” a friend of mine told me when Moi died. “How can a country that is unable to face and deal with its past move forward,” writes Kenyan columnist Oyunga Pala in his essay Children of a Revolution that Never was.

Those who claim Kenya needs more time to put her act together are plainly dishonest. Kenyan state is 59 years old for Christ’s sake. We don’t expect a nation-state at this age to be trapped in things like disregard to rule of law. Our founding fathers didn’t envision that at the age of 56 Kenya would still entertain disobedience to court orders, institutionalise violence and allow individuals who claim authority over human life to run her affairs.

Many Kenyans have died in extrajudicial circumstances at the hands of state police operating like an organized criminal enterprise. On December 22, 2018, in Kibra, Nairobi, Leeds university student Carilton Maina was shot by police for being mistaken to be a criminal. Maina, who was walking home in company of his friends at night, died on the spot. This incident was one of the many cases in which the police have been accused of killing innocent civilians under the guise of fighting insecurity. Most of these deaths happen in squalid parts of Nairobi notably Kibra, Mathare, Babadogo, Kawangware and Majengo. Similar numerous cases of extrajudicial killings have been executed in different parts of the country.

On October 4, 2018, the country woke up to the macabre murder of seven-month pregnant Sharon Beryl Otieno. Sharon was abducted and her mutilated body found at a thicket in Kodera forest in Homa Bay County. She was a second-year student at Rongo University. Former Migori Governor Okoth Obado who was implicated in the murder of Sharon acknowledged responsibility for the pregnancy but repudiated any wrong doing.

On March 5, 2009, in one of Nairobi’s leafy suburbs, University of Nairobi students Oscar Kamau Kingara and Paul George Oulo were shot by people dressed in police uniform. The incident happened in full glare of the public. To this day, the murders remain unsolved.

John Kituyi, a journalist who was writing on disappearances of International Criminal Court (ICC) witnesses, was killed on April 30, 2015. Mr Kituyi’s murder came a time when the ICC was mustering witnesses to testify in a case lodged against former president Uhuru Kenyatta and the current president, William Ruto.

The two, alongside Hussein Ali, Francis Muthaura, Joshua Sang and Henry Kosgey, were indicted by the ICC for crimes against humanity relating to the 2007-08 post-election violence. On January 23, 2012, Pre-trial chamber II confirmed charges against Francis Mathura, Joshua Sang, William Ruto and Uhuru Kenyatta.

Another scribe Francis Nyauri was killed in January 2009 and his body dumped in the infamous Kodera forest in Homa Bay. On February 27, 2018, 23-year-old Meru University student leader Evans Njoroge was killed by a policeman in cold blood. Autopsy report revealed that Mr Njoroge was shot at close range.

Following the shambolic 2017 presidential elections, a battalion of police was deployed in regions perceived to be opposition strongholds particularly Kisumu, Kibra and parts of Eastlands in Nairobi where protests were highly witnessed. A bloodbath ensued in these regions leaving a death toll of hundreds of innocent civilians including six-month old Samantha Pendo who was hit at the head by trigger-happy police at their home in Nyalenda, Kisumu County. If the Kenyan state initiated violence, it did so in a well strategized scheme that can easily be described as ethnic cleansing but which government operatives were quick to disabuse.

By ethnic cleansing I mean the Kenyan state targeted members of a specific community, the Luo.

These souls are turning in their graves in such of justice. Their families are asking for justice. Who will listen to them?  Who will give them rest? Who will fight for justice for Sharon and Kituyi and Maina and Baby Pendo and Njoroge and thousands of others who have died in extrajudicial circumstances? Who?