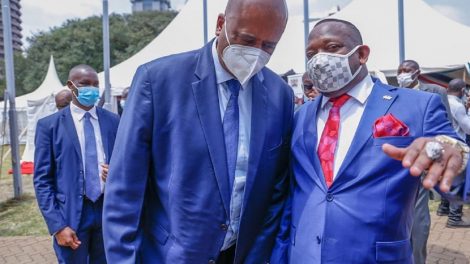 The embattled governor claimed that the Major General has embarked on the clauses of paying ghost works a culture that he had already scraped off.

On Tuesday, September 29, Sonko said, “Out of their pursuit to perpetuate impunity, as it has become their trade, the NMS made illicit arrangements to pay the staff seconded to them a few days ago. It has since emerged that they paid salaries to dead people and retirees, returning Nairobi to the culture of paying ghost workers that I had eliminated since I assumed office.”

Sonko stated that the NMS is under the office of the president, and no law allows the county to finance the departments shifted under the management of the NMS.

He alleged there is no legal mechanism for Nairobi to transfer cash to the NMS, and it is, therefore, a mystery how they receive, withdraw, and account for funds.

Sonko stated that the NMS has not been providing concrete work and that the town has gabbled up with garbage piling up.

Moreover, Sonko stated that he had abolished ineffectiveness in all the hospitals within the county. He accuses the NMS of what happened at the Pumwani Hospital, where an-expectant mother delivered her baby outside the hospital after being denied access.

He has lamented his county is on pressure from Auditor-General to account for over Sh294 million Covid-19 funds.

Two Kings to Throne the London Marathon on Sunday