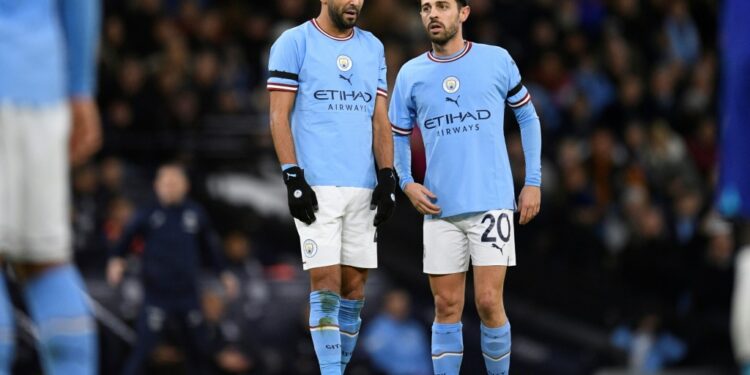 Former African Footballer of the Year Riyad Mahrez tormented Chelsea at the weekend for the second time in four days, scoring twice as Manchester City triumphed 4-0 in the FA Cup.

Last Thursday, the 31-year-old Algeria captain and midfielder netted the winner in a Premier League clash between the clubs.

Mahrez, who missed the 2022 World Cup in Qatar after the shock elimination of Algeria by Cameroon in a play-off, excelled at set pieces as City crushed Chelsea in the Etihad Stadium. He put City ahead with a brilliant 23rd-minute free-kick and completed the rout by converting an 85th-minute penalty.

The Egypt forward scored Liverpool’s second goal against Wolves, but it was not enough to ensure his side’s progress as the Reds were held to a 2-2 draw at Anfield. Despite Wolves’ appeals for offside, Salah netted in the 52nd minute when he slotted home to move past Kenny Dalglish in Liverpool’s all-time scoring chart with his 173rd goal since arriving from Roma in 2017.

The Nigeria midfielder will be sidelined for around three weeks with the ankle ligament injury he sustained in a 3-1 defeat at Manchester United. Struggling Everton confirmed the news following a scan and said Iwobi’s injury will be “managed conservatively” by their medical team. Iwobi was stretchered off early in the second half after being caught in a challenge by Tyrell Malacia.

Nigeria striker Osimhen was again key for Napoli as the Serie A leaders extended their advantage to seven points with a 2-0 win at Sampdoria. On a night full of emotion for deceased Samp legends Gianluca Vialli and Sinisa Mihajlovic, Osimhen, 24, wasn’t in a sentimental mood, poking home his league-leading 10th goal of the season in the 19th minute to put the away side ahead and help them bounce back from midweek defeat at Inter Milan.

Marseille defender and Ivory Coast international Bailly was sent-off for an ugly flying tackle which left a French Cup opponent in intensive care. Bailly, 28, who is on loan from Manchester United, was red carded after just 15 minutes of the tie at fourth division amateur side Hyeres when his foot crunched into the chest of Almike Moussa N’Diaye. Hyeres president Mourad Boudjellal, the colorful and controversial former owner of Toulon rugby club, told AFP that N’Diaye was transported to hospital in Marseille and placed in “intensive care as a precaution”. Marseille won the last-64 tie 2-0.