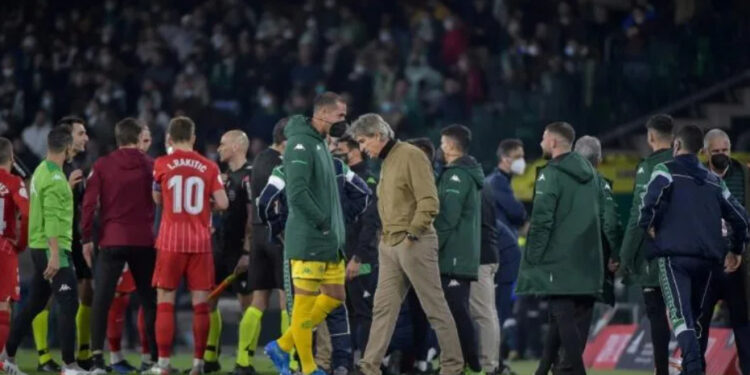 A Copa del Rey match between rivals Sevilla and Real Betis was abandoned on Saturday after Sevilla’s Joan Jordan was struck on the head by an object thrown from the crowd.

After a stoppage of around 45 minutes at the Benito Villamarin, the Spanish federation (RFEF) confirmed the last-16 game had been abandoned, with the score at 1-1. Jordan did not appear seriously hurt.

“The Copa del Rey knock-out match between Real Betis and Sevilla is suspended. The RFEF condemns all acts of violence on the pitch,” the federation said in a statement.

It will now be up to the federation to decide whether the game gets replayed or restarted, and how many Betis fans are allowed to attend.

One option is for the match to be played behind closed doors.

Nabil Fekir had just equalized for Betis in the 39th minute, scoring straight from a corner, when a long object thrown from the stand at the Benito Villamarin hit Jordan.

Jordan fell to the ground clutching his head. The midfielder received treatment and was soon standing up again.

Referee Ricardo De Burgos spent around 10 minutes speaking to officials and coaches on the side of the pitch before signaling the game would be stopped.

Some players walked down the tunnel while others put on their tracksuits and sat on the substitutes’ benches, waiting for a resolution.

Around 45 minutes after the incident, the federation confirmed the game was off. Betis’ players returned to the pitch and applauded the home fans.

Papu Gomez had given Sevilla the lead in the 35th minute with a curling shot into the corner before Fekir’s stunning effort made it 1-1 four minutes later.