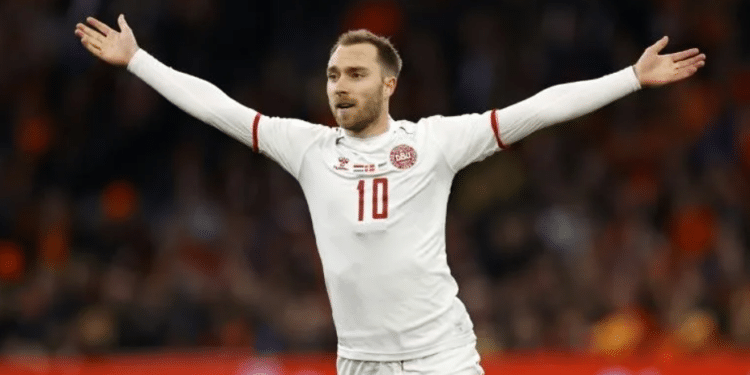 Denmark’s Christian Eriksen scored on his return to international football after suffering a cardiac arrest last year in a 4-2 friendly defeat against the Netherlands on Saturday.

A little more than nine months – 287 days – after his collapse at Euro 2020, Eriksen pulled off a remarkable comeback at the Johan Cruyff Arena in Amsterdam.

To the resounding applause of the Dutch public and manager Louis van Gaal in particular when he came off the bench, Eriksen raised his hands to the sky in thanks.

Two minutes after coming on at half-time, the Brentford midfielder then scored a superb goal with a powerful strike into the top corner, his 37th goal in 110 appearances.

Eriksen was clearly delighted with his strike which cut the Dutch lead to 3-2.

He was congratulated by his team-mates, many of whom were there when he suffered his cardiac arrest.

The 30-year-old collapsed in Denmark’s opening game of the European Championships against Finland in Copenhagen last June.

He had to be resuscitated on the pitch, lying unconscious for several minutes as the stunned crowd and millions of television viewers around the world watched on in horror.

Eriksen spent several days in hospital and had a pacemaker implanted to regulate his heartbeat.

He terminated his contract with Inter Milan by mutual consent in December as Italian league rules bar players with pacemakers.

He was signed by Premier League outfit Brentford in January, making three appearances to date.

It was also fitting he scored in the Amsterdam Arena, the home of Ajax.

Eriksen came through the ranks at the Dutch side, making 162 appearances for the club and winning five trophies, including three consecutive league titles between 2011 and 2013.