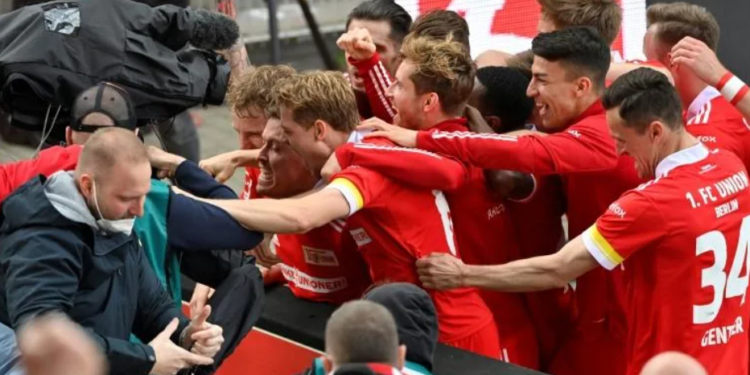 987
SHARES
3.9k
VIEWS
Share on FacebookShare on TwitterShare on WhatsApp

Union Berlin striker Max Kruse stands by his criticism of the Europa Conference League, even after his winning goal on Saturday qualified his Bundesliga side for the play-offs of next season’s new club competition.

Kruse headed a last-gasp goal to seal a 2-1 win at home to Bundesliga runners-up RB Leipzig on Saturday which left Union seventh and with a chance of playing in the Europa Conference League.

After the Champions League and Europa League, it will be the third tier of European club football when it makes it’s debut next season.

“It’s world class that we reward ourselves in the last minute in the last game of our sensational season,” beamed Kruse after his 11th league goal this season fired Union into Europe.

The 33-year-old former Germany striker stood by his previous criticism of the Europa Conference League – “I’m not really up for it. I don’t even know what it is” – even though he will play in it next season.

“I want to remain credible,” he replied when asked about his previous criticism. “But I also said that I want to win every game, and it was clear that we will play in this (new) league if we won.

“I always give everything to get the victories.”

A pilot project in Berlin and falling numbers of Covid-19 in the capital meant 2,000 fans were allowed into Union’s ground and chants of “Kruse, Kruse” echoed around the terraces after the final whistle.

His close-range header means Leipzig head coach Julian Nagelsmann has lost three of his last four games before taking over at Bayern Munich next season.

Leipzig were on course to win Nagelsmann’s final match when Justin Kluivert – son of Dutch legend Patrick — gave them the lead early in the second half.

However, the hosts fought back as defender Marvin Friedrich equalized before Kruse’s winning header in the 92nd minute.

Kenyan woman in the diaspora missing