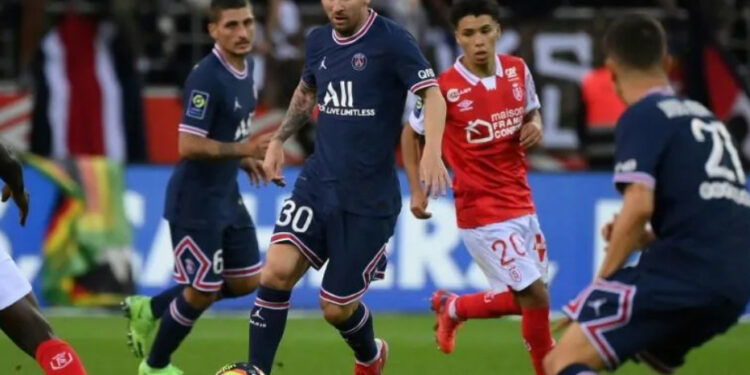 Lionel Messi made his Paris Saint-Germain debut on Sunday, coming off the bench in the second half of their Ligue 1 game against Reims.

The Argentine was introduced as a substitute in the 66th minute, replacing Neymar with PSG leading 2-0 at the time thanks to a brace from Kylian Mbappe.

Messi’s first appearance comes almost three weeks after he joined PSG from Barcelona. His last game of any sort was the Copa America final between Argentina and Brazil on July 11, some seven weeks ago.

The game at the 21,000-capacity Stade Auguste-Delaune was a sell-out and excited fans in the home sections of the ground chanted Messi’s name as he came out to warm up early in the second half.

After Sunday’s match he is due to head off on international duty with Argentina, who play three 2022 World Cup qualifiers in the next fortnight against Venezuela, Brazil and Bolivia.

MAN OF THE MATCH – KYLIAN MBAPPE (PSG)
If this was Mbappe’s final match for PSG, it was an excellent way to sign off. The French forward gave his team cutting edge in front of goal. Mbappe has had better games, but this only demonstrates his quality further – even when he plays within himself, opposition teams can’t handle him. PSG might still be giddy following the signing of Messi, but the loss of Mbappe would set them back. They would be a significantly poorer team without the 22-year-old who could be a Real Madrid player by the time the transfer window closes.

KEY MOMENTS
15’ GOAL! Reims 0-1 Paris Saint-Germain: There’s the opening goal and it belongs to PSG! Di Maria cut back on to his left foot from the right wing and found Mbappe in the middle. The French forward then had the relatively simple task of heading into the back of the net!
43’ Outside of the post! What a brilliant effort and that was very nearly an equaliser! Cassama took aim from the edge of the box, it was a looping effort, but it clips the outside of the post!
55’ GOAL DISALLOWED! After a lengthy delay, the VAR has chalked off Munetsi’s goal for offside. That was probably the correct call, but PSG have got away with one there!
63’ GOAL! Reims 0-2 Paris Saint-Germain: A second goal for PSG, a second goal for Mbappe! Hakimi burst forward down the right side on the rapid counterattack, finds Mbappe at the back post with a brilliant cross and the French forward has a simple finish from close range!
KEY STATS
Kylian Mbappe has been directly involved in 194 goals in all competitions for Paris Saint-Germain.
Only one defender (Borna Sosa – 12) in Europe’s big five leagues has made more assists since the start of the 2020/21 season than Achraf Hakimi (10).
Tags: FootballKylian MbappeLionel MessiPSGReims