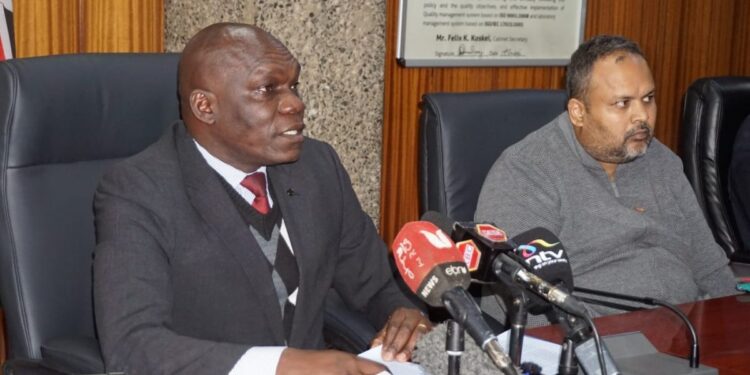 The government has assured Kenyans that it has engaged enough millers to supply the subsidized maize flour at the recommended price of Sh100 and below.

Ministry of Agriculture, Livestock, Fisheries and Co-operatives Principal Secretary (PS) Dr. Francis Owino said that a total of 129 millers, both large and medium scale have been enlisted to participate in the programme for an initial four weeks, effective 22nd July 2022.

“The millers have since commenced milling and servicing the markets with the subsidized sifted maize flour. We have been implementing an elaborate system of operationalization of the programme to ensure that the Mwananchi gets the Unga at the desired price,” said Dr. Owino.

The PS, speaking on Monday during the press briefing on the implementation of the maize subsidy programme at Kilimo house said that they have set up a one stop command centre at Kilimo house, where all issues on the programme are being dealt with.

Dr. Owino added that monitoring teams have been assigned to individual millers to verify stocks and dispatches to inform the payment process.

“We have also dispatched teams across the country to monitor the situation and are sending daily updates on the progress of the programme. Emerging challenges are addressed by the Regional Oversight Committees as well as the Command Centre domiciled at the Ministry Headquarters, with a dedicated hotline 0800 724 891 to receive and respond to millers queries,” said the PS.

He explained that to date 3.2 million kilograms of Unga have been supplied to the market and this is expected to increase this week.

“Our observations and feedback from the teams on the ground indicate that flour has been retailing at the prescribed Sh.100 per 2Kg packet in most areas. However, there are some regions where we have also observed some pockets of the same retailing at the old prices as the programme is yet to trickle down to them,” said the PS.

He highlighted that with millers now upscaling production and enhancing their distribution to reach all areas, they expect the retail prices to stabilize at the Sh.100 across the country and make the maize flour accessible.

“We have also noted incidences of panic buying in some areas and as such, we wish to assure the public that we have sufficient stocks, and these shall continue to be availed through accelerated production and availability of raw materials through imports as well as local production,” said Dr. Owino.

The PS said that the government has released Sh.4 billion for the programme and to date they have received invoices of Sh.325 million and Shs.160 million of payments have been processed already.

“I am pleased to inform you that we have set a standard to ensure that the turnaround time for payment of all invoices received is initiated immediately and done within 24 hrs. This is a standard we commit to uphold and maintain,” he said.

Dr. Owino appealed to millers to reflect on the credit period that stands at 45 days after delivery to conform with the Government commitment for payment.

He said that the Ministry and other Government agencies are awake to incidences of attempted fraud and misrepresentation of facts and figures. The measures put in place for verification and monitoring of production trends have enabled us to flag these incidences.

“Through this multi-agency approach we are also tracking incidences of hoarding of flour, and we shall take appropriate action on the millers and wholesalers who are involved in these malpractices. I note with concern that some retailers who have received the programme stocks are selling above the recommended retail price allegedly to cover for transport costs,” warned the PS.

Grain Belt Miller Chairman Kipngetich Mutai said that they have been assured of payment in 24 hours and two of their members had received payment last Friday.

“Millers will ensure a full operation roll out and there will be enough maize flour next week,” said Mutai.

Proprietor of Tridnet millers Atin Aggarwal urged millers to operate at full capacity, since the government has sufficient funds and he has been paid on time.

“We have been supplying into the market enough maize flour and we are adhering to the government directive of selling maize flour at Sh.1,080 per bale, which comes to Sh.90 per 2Kg pack in wholesale so that the retail shop can sell the Unga at Sh.100,” said Aggarwal.

Investors Plan To Operationalize A Special Economic Zone In Nakuru

Tuju On Mutua, Kingi Exit from Azimio – ‘We Knew They Were Playing for Both Sides’