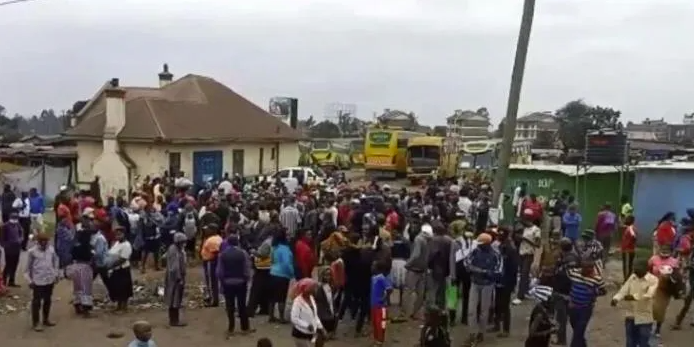 At least 400 families have been rendered homeless after they were forced to move out of their homes located within the Muthurwa Estate on Saturday, September 19.

This came after the expiry of a 24-hour notice issued by the Kenya Railways Staff Retirement Benefits Scheme, which claimed ownership of the land.

“Be warned that this land belongs to the Kenya Railways Staff Retirement Benefits Scheme, and we have no tenancy agreement with any occupants in the area. We shall take no responsibility for any loss incurred at the expiry of the time allocated,” the notice reads in part.

“You are hereby notified to vacate the premises described above within 24 hours from September 18 at 5pm. Be warned that this land belongs to the Kenya Railways Staff Retirement Benefits Scheme and we have no tenancy agreement with any occupants in the area. We shall take no responsibility for any loss incurred at the expiry of the time allocated,” acting Chief Executive Officer Pharis Ngotho said.

PHOTO FILE: A Muthurwa resident loading his belongings onto a tuk tuk on September 19, 2020

Speaking to the media, one of the residents revealed that he had been living in Muthurwa since 2011, but opted to heed to the notice to avoid any losses.

However, he was also quick to point out that a 24-hour notice was not sufficient for families to make the necessary arrangements to allow them move smoothly.

Patrick Githinji, the Chairman of the Muthurwa Resident Welfare Association echoed the sentiments, adding that they had written a signed petition and addressed it to President Uhuru Kenyatta.

“At least 400 of us have signed a written petition to the President informing him of our plight. We also highlighted that Justice Isaac Lenaola had directed the Attorney General to draft an eviction guideline that would be used under similar circumstances,” he explained.

On December 21, 2015, the tenants lost a bid to stop the Kenya Railways Corporation from demolishing their houses.

In his ruling Justice Lenaola ordered that the residents should vacate on or before April 30, 2016.

His verdict came a year after he declared that Kenya Railways had violated the residents’ rights to accessible housing and ordered its managing trustee to hold meetings with them in 21 days to come up with a programme for their eviction as required by law.

“It seems to me that goodwill does not exist among any of the parties in this litigation. It is close to two years since then, and the opportunity to amicably address the date and conditions of eviction has been lost, the residents are, hereby, ordered to vacate the said premise,” ruled Justice Lenaola.

One of the residents caught up in the latest eviction said that he had decided to vacate before the bulldozers came in, as he did not want to risk the safety of his children.

“You cannot go head to head with the government,” he remarked while loading his belongings on a tuk tuk.

The eviction meant to pave way for the estate’s redevelopment has dragged on since 2010.

IEBC To Brief Hopefuls Ahead Of Clearance Exercise