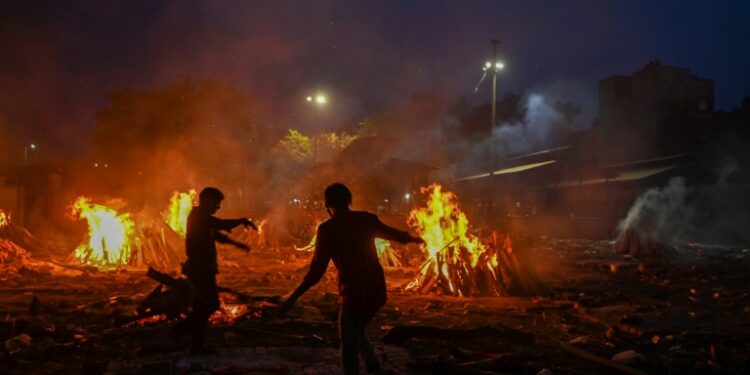 International support grew Thursday for a US proposal to waive patents on much-needed coronavirus vaccines, a move strongly opposed by pharmaceutical companies which said it wouldn’t fix the supply problems.

Rich nations have faced accusations of hoarding shots while poor countries struggle to get inoculation programs off the ground, with the virus surging across the developing world in contrast to the easing of restrictions in Europe and the United States.

The problem was highlighted as India, one of the worst-hit countries, registered record Covid-19 cases and deaths on Thursday.

Under intense pressure to ease protections for vaccine manufacturers, Washington’s Trade Representative Katherine Tai said Wednesday that the US “supports the waiver of those protections for Covid-19 vaccines”.

WHO chief Tedros Adhanom Ghebreyesus hailed the announcement as “a monumental moment in the fight against Covid-19”.

The African Union’s health watchdog also praised it as a “remarkable expression of leadership”.

Germany, however — home to leading vaccine developer BioNTech — voiced outright opposition to the US call.

“The protection of intellectual property is a source of innovation and must remain so in the future,” a government spokeswoman said.

But there was far more enthusiasm from other national capitals including Paris, Rome and Vienna as well as World Trade Organization chief Ngozi Okonjo-Iweala.

With more than 3.2 million lives lost to the virus worldwide since the crisis began in late 2019, a Western diplomat close to waiver discussions at the WTO told AFP there was now a lot of political pressure for countries to fall in line.

Bad news for big pharma
However, the move is opposed by a consortium of big pharmaceutical companies, which described the decision as “disappointing” and warned it could hamper innovation.

Shares in Asia-listed vaccine-makers — including Shanghai Fosun Pharmaceutical, CanSino Biologics and JCR Pharmaceutical sinking — tumbled Thursday after the US announcement.

Supporters of the waiver say that easing patent restrictions will spur production of low-cost generic vaccines, helping poor countries that are struggling to immunize their populations.

Pfizer CEO Albert Bourla insisted that patents are not the main roadblocks to more production.

“The problem is that there are no facilities in the world outside the ones that we can build ourselves,” he told AFP, denouncing “politically motivated announcements”.

German firm BioNTech agreed, saying that scrapping patents would not lead to an increase in jabs in the short or medium term.

India has been leading the fight to allow more drug makers to manufacture the vaccines, as it faces a surge that has seen patients die in streets outside hospitals due to bed and medical oxygen shortages.

The country on Thursday reported almost 4,000 Covid-19 deaths and more than 412,000 infections — both new records.

Eid celebrations hit
Also battling rising coronavirus cases is Egypt, which announced a partial shutdown of malls and restaurants and called off festivities for the Muslim holiday of Eid al-Fitr to curb the spread.

The country has now recorded more than 13,000 deaths, with Prime Minister Mostafa Madbouli saying it was suffering a “third wave”

Eid celebrations are also facing disruption in Muslim-majority Malaysia, where new rules in the capital Kuala Lumpur will see only essential businesses allowed to operate and restaurant dining-in banned after daily cases topped 3,000 in recent days.

Authorities are similarly moving to stem a cluster in the Australian city of Sydney, where two new infections sparked a hunt for the source of its first local Covid-19 cases in more than a month.

As Europe gears up for the summer holiday season, Israel was added to an EU safe list for countries whose nationals can freely travel to the continent.

The vaccine rollout is speeding up in Europe, with Germany aiming to offer vaccines to all children aged 12 and over by the end of August once a jab is approved for younger people by the European regulator, Health Minister Jens Spahn said.

Sweden meanwhile announced it had recorded over one million cases — representing nearly a tenth of the population — as the Nordic nation struggles to rein in a third wave of the virus.

In the sports world, there was hope for the Olympic Games in Tokyo as Pfizer/BioNTech said they would supply vaccines for athletes.

“Kenya Kwanza Has Faith In IEBC And We Are Sure They Are Going To Do A Good Job,” DP Ruto Says