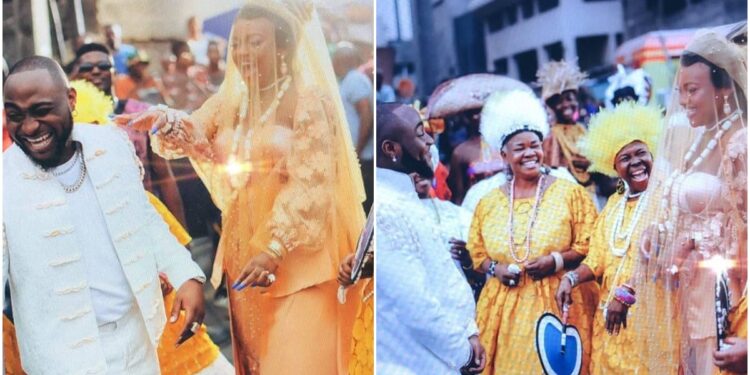 It is now official Naija music star Davido and his long-time lover Chioma Rowland are husband and wife.

The Kenya Times has learnt that Davido and the love of his life officiated their union through a traditional wedding ceremony held at his father’s home in Banana Island.

According to the Nigerian gossip IG page @gistloversgram_mediahouse!, Davido and Chioma’s traditional nuptials saw the attendance of only a few members of his family and friends.

The Kenya Times understands the wedding was so secretive that no cameras were allowed at the ceremony’s reception.

Unconfirmed reports indicated that everything was all systems go after Davido paid Chioma’s bride price in full.

The reports further revealed that the secret wedding was held on Sunday, November 6, as consolation to Chioma for losing her son with Davido and to assure her that her place in the singer’s life is confirmed, with or without her son.

The Kenya Times has learnt Davido and Chioma’s church wedding will be held in the coming weeks, with many suspecting it would be as private and secretive as their traditional wedding.

As earlier reported by The Kenya Times, Ifeanyi died on Monday, October 31, after drowning in a swimming pool at his father’s residence in the Banana Island area of Lagos State.

The news of Ifeanyi’s sudden death shook the world with countless celebrities taking to different social media platforms to console Davido and Chioma over the loss.

Ruto Says They Will Win Against ‘Deep State’ On Tuesday

Nyamira Assembly collapse: Those responsible to face full force of the Law