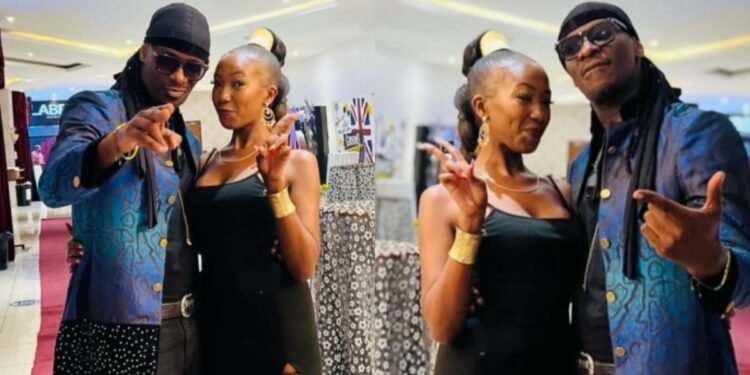 Legendary Kenyan musician David Mathenge alias Nameless over the weekend could not contain his excitement after bumping into a fan who bears striking resemblance to his wife, singer Wahu.

The musician took to his Instagram page and posted a couple of photos of himself hanging out with a young lady who looks nothing short of Wahu.

From her facial structure, body side, smile, and even complexion, the lady screamed Wahu, and Nameless’ fans could not agree more.

In his caption, Nameless made it clear that indeed he was super excited to have met the fan but feared Wahu would not be happy if at any point he would have called the lady beautiful.

Also Read: Nameless in Online Battle with Fan Over Signature Durag: ”Maturity Is Not What You Wear,”

“Meanwhile, juzi met someone who was excited to meet me cause people tell her she looks like Wahu… So we decided to take some pics for fun.. she actually kinda does look like mama Shiru ama naona vitu zangu 🧐🤔…even the kisogo🙌🏾 check slide 3.. I thought chakula ya Shiru ametoroka Shiru Tena 😂😂😂 kumbe ni lookalike😊🙌🏾,” Nameless wrote.

“Anyway , always a pleasure to meet a Nameless fan. Inanijenganga😊 nakunipatia motisha kuzidi💪🏾💪🏾🙏🏿..Question . Would I be safe with Wifey if a said this lady is very beautiful, since she looks very much like wifey I am indirectly complimenting my wife or nijifunze tu kunyamaza ,😁😁😁,” he added.

The photos of Nameless and Wahu’s doppelganger excited his fans and followers who admitted indeed the lady fan looks like Wahu.

Others, however, did not forget to remind Wahu to be watchful since Nameless had found a younger version of his wife.