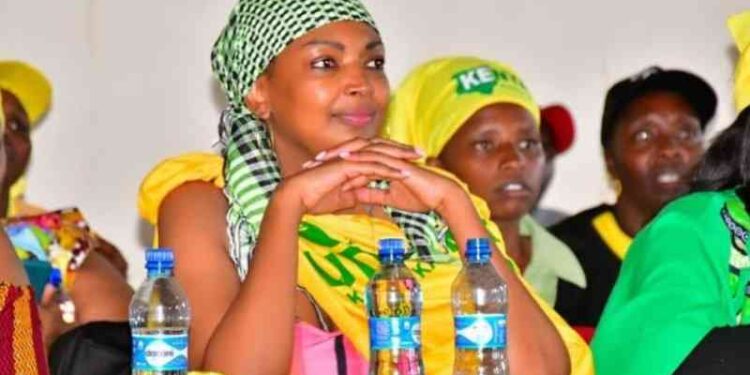 Nominated Nairobi Senator Karen Nyamu is tired of people who want to advise her on how she should deal with her relationship with baby daddy Samidoh.

The politician has in the past few hours asked Kenyans who have been trying to do the aforementioned to let her be as she does not need their relationship advise.

Karen Nyamu, on Saturday, November 19, while on her journey back to Kenya took to social media to maim her many “concerned” fans with a calm, yet serious post.

The vocal politician shared a photo of herself in a plane followed by a caption telling off nosy followers.

The mother of three not only shun the relationship advice from fans but also shared about how she had missed them and cannot wait to reconnect.

“Staki ma advise Mimi. Nairobi I missed you too. See you in a few hours,” Karen Nyamu wrote.

Also Read: Justina Syokau Cries for Rayvanny’s Love, Promises to Give Him 5 kids

As the story goes, Karen’s fans could not take the closeness between Samidoh and Barnice and told on them to the politician, with many hoping she’ll do something to save romance with Samidoh.

This led to her throw jabs at Barnice, albeit indirectly.

However, she met her match in Barnice who dragged her online on end as she asked her to keep off her life.

While Karen denied ever fighting over Samidoh, Barnice came out gloves off ready to deal with the politician accordingly.

Karen Nyamu and Samidoh have two children together and have been serving Kenyans with a hot telenovela on social media.