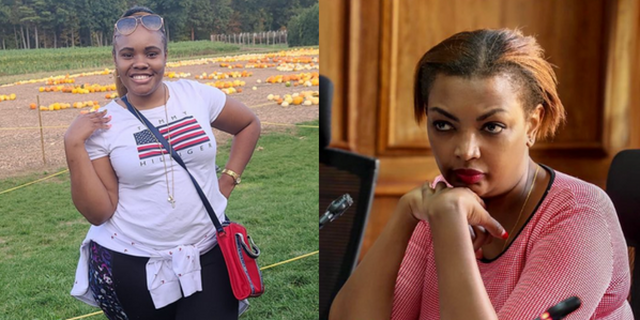 US-based music promoter who is known for organizing most of Samidoh’s mugithi shows in America, Barnice Saroni has picked a bone to chew with the musician’s baby mama, nominated senator Karen Nyamu.

Saroni, on Wednesday, November 9, through her official Facebook blasted Karen Nyamu as she asked her to leave her alone.

The curvy show promoter who is allegedly hosting Samidoh during his US on a music tour called out Nyamu for tormenting her over Samidoh.

In a long post seen by The Kenya Times, Barnice wondered why Karen Nyamu was so obsessed with Samidoh and suspected she is sleeping with her while in the US.

Barnice harshly asked Karen Nyamu to respect her and focus on raising her kids instead of always causing trouble because of her undying love for Samidoh.

The promoter not only claimed Karen Nyamu was behaving without dignity and embarrassing herself but also strongly denied ever fighting with her over Samidoh.

Barnice advised Karen Nyamu to heal from her ‘breakup’ with Samidoh and stop subjecting other people to her frustrations.

… eish nominated senator you’re beyond this stupidity, now you have stepped on the wrong toes… u video called wanted to know who I am then u twist the story ati we are Friends since when and how?? You need mental evaluation otherwise I’ll drive you myself for therapy. Don’t bleed on me with your past wounds, get healing. Kwani Sam ndie wa kwaza kukuwa na yeye, kila siku ni kutry to prove a point: nonsense you can’t let people breath nkt. My advice mama focus na kulea watoto like most of us… At least behave like a woman of value ama least Dignity kidogo nominated whatsoever,”Barnice wrote.

As earlier reported by The Kenya Times, a random fan had asked Karen if she was in any way fighting with Barnice over Samidoh.

The politician denied fighting over Samidoh but confirmed the musician is worth fighting for and over.

Samidoh has not addressed the issue but has been spotted severally looking all happy alongside Barnice while in the US.

Paul Mwangi: Chebukati Is Not The Commission, Cannot Act Alone

Elachi Urge Leaders to Work Together and Shun Enmity